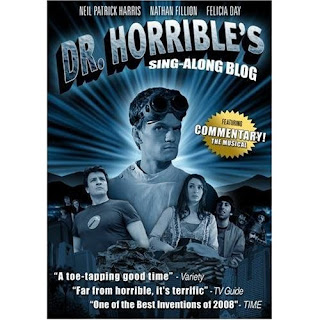 I know I fail as a geek for taking so long to get around to seeing this. But when I finally did, I had to punch myself for waiting so long. I won’t lie, I actually kinda like musicals, as long as they are actually entertaining. There’s just something about the main character singing about how they’re going to kill their rival.

Dr. Horrible’s Sing-Along Blog goes beyond just being a musical in a time where musicals are frowned on by the general public, and an internet sensation. What really struck me about this movie was the irregular antagonist/protagonist dynamics between Captain Hammer and Dr. Horrible.

Horrible is a loser with the goal of joining the Evil League of Evil. A goal that he regularly fails at. Evil aside, this clear goal make us root for Horrible as a protagonist. And while the goal is evil, there is a grain of good in it. He mentions (in song) society’s ills several times, and reveals that he wants to fix them. The only problem is that his solution is to take over the world.

But, since there is a small core of good in his goals, we as non-villains, can allow ourselves to root for him.

His other goal is to win the love of his life, Penny. It’s a simple, classic goal for a protagonist, and easily his most understandable goal. We all know the feeling of feeling nervous around someone we have a crush on/love. Because this is a major part of his motivation, we are able to see him as a real human being, and not a villain stereotype of any kind. This makes Dr. Horrible all the more sympathetic.

What makes Horrible all the more sympathetic towards the viewer is his personality, and the contrast between him and Captain Hammer.

Horrible is the typical loser, but the lovable kind. When you look at him you don’t think, “Well of course he’s a loser, just look at him.” Instead we see him as a loser when he doesn’t deserve to be one. He’s funny, sympathetic, and overall a nice character (who wants to take over the world). His strongest characteristic however is his unwillingness to kill. This comes to a head about halfway through when he realizes that the only way to achieve his goal is to kill someone.

The most interesting part of him is that while to the viewer his two goals, become an established super villain, and gaining Penny’s love, seem at odds towards each other, to Dr. Horrible they are both connected. Which in the end, is just as great a tragedy as the actual ending. Even if things had worked out the way he wanted, he still would have only gained one or the other.

Captain Hammer on the other hand, is a jerk. He’s a hero, but it’s quite clear that he’s only in it for himself and the adoration of the public. This in itself wouldn’t be such a big deal, if it weren’t for his general arrogance and relationship with Dr. Horrible.

Captain Hammer and Dr. Horrible’s relationship is the classic bully/victim relationship. Hammer’s bullying of Horrible is portrayed as excessive behavior from a so-called hero, and reveals Hammer’s true selfish personality. In fact, Captain Hammer is so detestable that by the time Dr. Horrible decides to kill Hammer, we’re actually cheering for him. Despite the fact that reluctance to kill was one of Horrible’s redeeming qualities, Captain Hammer has become so detestable that we want him gone as just as much as Horrible wants.

Overall this entire production was an education in itself for me. I was able to learn a lot about how to make characters sympathetic or antagonistic, whether they are the classic heroes or villains, or not.

If you liked my review, buy the movie at: Dr. Horrible’s Sing-Along Blog