It’s been announced that Grant Morrison will be the writer for a six-issue mini-series starting in April 2010. It features a time traveling Batman making his way back to modern day Gotham City, escaping from his toughest challenge yet, while at the same time allowing Morrison to make several Elseworld titles part of the DC canon.

That’s right. Batman has now joined the ranks of the resurrecting superheroes.

Remember Doomsday? And the Epic Failure the Death of Superman was? Remember how Jean Grey has a get-out-of-jail-free card for the afterlife?

Yup. And I think this quote really explains it all.

“As we saw at the end of the Final Crisis book, Bruce Wayne was never dead, only AWOL, so this was never a literal “back to life” story. And I like to think the series will have a wider general appeal than some of the continuity driven “death and rebirth”-type stories we’ve seen before,” Morrison, USA Today.

So…the difference between The Return of Bruce Wayne and ever other “death and rebirth” story is that it’s a loophole?

It really doesn’t help that it was painfully obvious that Batman was going to fall prey to this trope. From seeing Bruce Wayne paining the bat-symbol on cave walls, to constant repetition from Selina Kyle that he wasn’t dead, just MIA. Note: I enjoyed her reaction to his “death”, but was annoyed that we didn’t get to see her at the moment where she heard the news. She also happens to be one of my favorite characters, so ideally I would have wanted her in Final Crisis. But that is neither here nor there.

Well. We all knew this was coming. No way Batman would stay dead/missing. Kill of one of their greatest cash cows…I mean characters? Not on your life. Of course I was excited when I found out that he’d finally be coming back, but I’m still pissed that it was even necessary in the first place.

According to Grant Morrison, this mini-series is; “…the latest chapter in the long-running, “definitive” Batman epic I’ve been trying to pull off since 2005.”

Am I wrong to say I don’t trust him to do this right? I was confused as all get out by Batman: RIP, and I’m not about to trust the man who “killed off” Batman int he first place.

“I’m doing at least another year of stories with Dick Grayson and Damian Wayne in the Batman and Robin book before that book starts to dovetail with Return and we rush headlong and screaming into the next big, earth-shattering, game-changing twist in the life of Batman.”

Is this going to be like the twist that apparently Bruce Wayne’s father is the head of the Black Glove? Or like the twist where along with loosing his mind he lost his impeccable fashion sense?

According to Morrison there will be:

“The first episode is set in the Late-Paleolithic Era, the second is in Pilgrim Era Gotham Village, and we also get to see Gotham in Western, or Noir style. Each of the stories is a twist on a different “pulp hero” genre – so there’s the caveman story, the witchhunter/Puritan adventurer thing, the pirate Batman, the cowboy, the P.I. – as a nod toward those mad old 1950’s comics with Caveman Batman and Viking Batman adventures…”

At the very least, the little art that is available is pretty awesome. 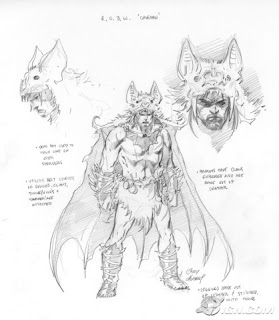 Apparently there used to be giant saber-toothed bats in the Paleolithic era?

I will say this, I hop that with his time traveling Batman will come across the night where his parents die. What will he do? Save his parents and change history? Or let his parents die – now when he can do something about it – because it needs to happen in order for him to become Batman?

There’s some strong storytelling potential here, and I for one would think it’d be a fascinating look inside Bruce Wayne’s character.

Sadly I won’t be surprised when this potential packed story line isn’t featured.

I’m excited for Bruce’s return, though I have also been enjoying Dick’s run as Batman. Will his return be as Epic as it should be? I can’t be certain it won’t be another Batman: RIP, which frankly I’m not looking forward to. At the very least, this series will finally undo the madness that has been brought upon us Batman fans. Once it’s done we can finally forget it ever happened and hope they let someone else had a go at the Helmship series that is Batman.

Either way, he’s Batman, nothing can beat him. Not Time, not the Adam West TV series, and not even Grant Morrison’s confusing writing style.