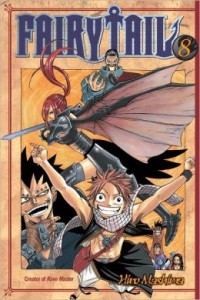 The Story
Fairy Tail is in dire straits as their guild is destroyed by Phantom Lord. Even though they’ve managed to defeat all the Element Four, Natsu and his friends are still faced by Gajeel and the master of Phantom Lord, Jose.

With all enemies, even the formidable Gajeel, taken out, Erza is the only one standing before Jose. That is, until Makarov’s miraculous recovery.

The Review
The nice thing about this volume is that not only is it more or less the end of an arc so I can discuss the storyline as a whole, but it’s also clearly divided into several different fights, which allows me to separate my review into digestible pieces. Say what you will about shonen action series, they can make for some pretty easy reviews. Unless of course one wants to actually sound intelligent during the discussion of said manga. Which is what I hope to do, so please, let me know in the comments how well I succeed in that aspect.

First off, the finale to Gray and Juvia’s fight. The first time I read this part of the story, this was the moment that I decided I was a fan of Fairy Tail. I had never seen anything quite like this fight. It was action, comedy, and romantic drama all rolled into one. Initially I just really enjoyed the humor of the fight, and the younger, less wise me got a chuckle out of the accidental grope. Now that I am a total of five years older, and have read through the series multiple times by this point, I can appreciate this moment for what it really is.

It’s a character moment for someone that at the time I didn’t realize would be important later on down the line. In a matter of just a couple of pages Mashima set up Juvia’s backstory, he manages to invest the readers in his plight, and then he solves the problem in a way that it’s little wonder Juvia would later become so obsessed with Gray. Reading through the fight this time allowed me to appreciate exactly how much Gray changed her life, just by clearing the skies for her. Though, how exactly that happened is a bit unclear, and never explained, but Mashima writes for emotional impact, not logical impact, so I for one can let it pass.

The fight between Erza and Aria, and later Erza and Jose, are both pretty much unremarkable. The first is to show how powerful Erza really is, and the second is to show how powerful Jose is. And in conjunction the two are able to pull that off pretty well. But the fights themselves aren’t the best in the series, and it’s a shame that Erza, who normally is treated so well by Mashima, didn’t get a bigger role this volume.

Makarov and Jose’s fight is interesting in that we get our first glimpse at what two master wizards can really do. But their true powers are kept more or less mysterious so as to allow Mashima not to show his hand where the ultimate power levels are concerned for his series. And while having clear boundaries are needed for fights in shonen series to really make the climax of an arc satisfying, I once again refer back to Mashima’s writing style focusing a great deal on style rather than substance. Which isn’t necessarily a bad thing, it’s just not as filling as some series can get.

Jose has always bugged me. On the one hand there’s elegance in simplicity, but on the other hand Jose goes past simple elegance into just plain simple. Jealousy and greed work perfectly fine as motivations, but I’m supposed to believe that Jose didn’t consider what would happen to him after this war? Did her really think the country wouldn’t intervene? Did he think he could fight against an entire country? How is someone so clearly evil the head of an official guild? It feels like Phantom Lord should have been one of the dark guilds that come into the series later on, but Mashima didn’t want to reveal those yet. Or at least he didn’t want to bring them back so soon after Eisenwald.

Still, we don’t know enough about Jose to really draw any real conclusions about what exactly he was thinking about the deeper issues of the war he instigated. Did he really think he could get away with it? We don’t know, nor can we know because that information is never delved into. On a surface level it works just fine, but one of Mashima’s biggest weaknesses is the fact that he rarely goes deeper than the surface level. All it would have taken was maybe one page or less of someone in the guild asking Jose if he really thinks the country will let them get away with this. Maybe show that he’s too far gone to consider that, or at least something.

Mashima’s villains in general feel very disposable, and in this arc especially we could have benefited from a few more scenes of Phantom Lord interacting with each other.

But, it’s time for the final battle between Natsu and Gajeel. What really struck me about this battle is that not only is this the first time we get to see two dragonslayers fight, this is the first time that we get to compare two different elements of the same type of magic. Most of the time Natsu’s ability to eat fire has been a major advantage, almost entirely because of the convenience of most of his opponents having some kind of fire ability. This time, however, Natsu’s ability is negated by the fact that, when you get down to it, fire really isn’t all that common. Sure it can easily be made, but think of it like this, in the real world how often would you actually come across fire in a life or death battle?

Seeing Natsu at a disadvantage in this way was a first for this series, and it really helps to drama of the fight to see Natsu so clearly outclassed. Though the way that he finally overpowers Gajeel is a bit contrived, but I don’t really come to Fairy Tail fights for anything more than a well rendered fight scene. It’s satisfying overall, but could be a lot more satisfying. But, for what it is, it’s quite good.