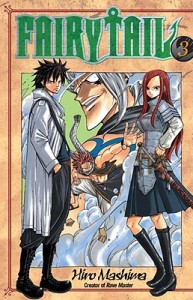 The Story
Natsu and team clash with the Eisenwald guild, making short work of the dark guild’s members. They learn the true target isn’t the citizens, but the guild masters’ meeting further down the line. They are trapped inside the trainstation by Erigor’s wind barrier. It isn’t until Happy reveals he has Virgo’s key that they are able to escape. Natsu and Happy go after Erigor and Natsu fights him.

After a tough fight, Natsu is able to defeat Erigor, but Kage escapes with the Lullab flute. He tries to play it, but is mentally defeated by Makarov, who convinces him not to go through with the plan. With Eisenwald stopped, the magic in the flute activates and reveals the true demon inside. Natsu, Erza, and Gray defeat it, crushing the meeting hall in the process.

During the match between Natsu and Erza, a messenger from the council arrives to arrest Erza.

The Review
As far as climactic fights in an arc go, the fight between Natsu and Erigor is pretty entertaining. I like how some thought goes into how Natsu’s flame beats Erigor’s wind, even if Natsu himself does not realize it. I kind of enjoy how Natsu just assumes he won through pure willpower, while Happy knows exactly why Natsu won. It seems to be a parody of the typical shonen fight, showing how there’s actually a fairly scientific reason for the hero winning, and it’s not all about just having guts.

I feel like mentioning Makarov’s pervy old man personality. It’s way overplayed in this volume, more so than in following volumes I think, and eventually it disappears from his personality almost completely. Seeing how Mashima does not stick with that characterization, I can’t help but wonder if he decided the pervy old man trope has been overdone.

While the fight between Natsu and Erigor was great, the fight against the Lullaby demon was pure padding. The entire purpose of the fight was to show off how powerful Natsu, Gray, and Erza are. But when the people commenting on the main characters’ power are themselves meant to be some of the most powerful wizards in the country, then it just feels excessive and silly. Are we literally saying none of these masters have powerful wizards in their guilds? Because this fight is just there for the characters to look cool there isn’t much substance to it, and therefore there isn’t much to enjoy about it. It could have easily been cut and this arc would have been better off for it.

The last thing I feel worth mentioning is the ongoing thread that Fairy Tail causes property damage. The most egregious example being the masters turning on Natsu and co after the Lullaby demon lands on the meeting hall. Do they honestly blame the people that saved them for the damage? It wasn’t like they could exactly control where the demon fell. It seems that a sensible person would realize that it was a fluke of fate, beyond the control of those involved, and just be glad they were saved.

This extends to Erza being arrested at the end of the volume. While I know how that turns out in the next volume, I do want to comment on how property damage is the go to accusation. Are buildings made of some ultra rare material that can not be reused once the building is destroyed? Is this really such a big concern that people lose their shit over it?

Despite my complaints, this really was a solid volume. The conclusion to the arc was strong overall, and showcased Fairy Tail’s strength at telling good, basic shonen stories. There’s a little bit more focus on cheese, and the humor is hit and miss, though this volume does contain one of my favorite jokes in the last chapter, so overall it depends on what your taste is. If you like basic shonen adventure then you should be reading Fairy Tail.