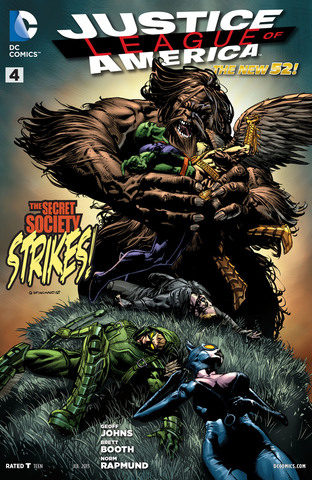 The Story
The JLA tracks down Catwoman and the Secret Society’s location and break in. Meanwhile Catwoman breaks free from her restraints but is recaptured. The leader of the society, a very Joker-esque looking fellow, puts a gun to her head and shoots her. In the backup Martian Manhunter remembers the event that lead to the death of his whole people.

The Review
It’s been said before, but it needs to be said again. If you’re a fan of Catwoman you need to be reading this book. I won’t say this is the best she’s ever been written, but considering her own series right now I will say it’s the best she’s been written in a long time. Though I do find that her constantly name-dropping Batman is a bit odd. It’s almost like the readers need to be reminded that she was a supporting character of Batman’s. Which I suppose works for new readers, but for literally everyone else we don’t particularly need the reminder. Though I did enjoy seeing how in this issue trying to use Batman’s name backfired on her.

That isn’t to say I’m not looking forward to Batman’s reaction. If nothing else I hope we actually get to see him react, if not it will feel like a wasted opportunity. Considering that Catwoman’s book is currently set after the events of this issue I’m sure she isn’t actually dead. If she really is dead then I’d almost say this is a bigger deal than Damian dying. She’s got far more history than he does, she’s been around for much longer. And with one minor exception there has only ever been one Catwoman, where there have been many Robins. Actually killing her off would take balls. Mostly because I will ragequit if she really is dead.

I apologize if I don’t comment much about the other characters. This is partially because I don’t know much about them, and so far this book hasn’t given me all that much. At the moment they’re really more like Catwoman’s supporting cast than an actual team. Hopefully we can take some time off in the future and get to know them all better.

I will note that Dr Light’s inclusion in this series, not as a villain, has me intrigued. Out of all the villains he’s most in need of a revamp. While I think the idea that a super villain is also a rapist isn’t the worst idea in the world, it’s far too real world for me to fully enjoy in my comic book. So please, let’s take a step away from the grim and gritty and try to stay away from rape in this future incarnation of Dr Light, shall we?