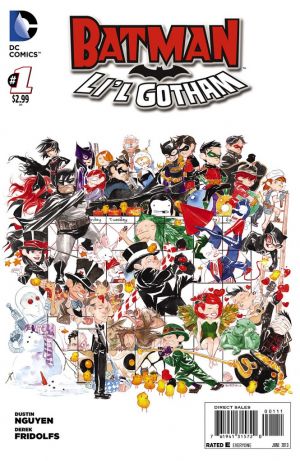 The Story
In the first story Batman explains halloween to Damian. The two run into the rogue’s gallery enjoying a holiday meal at a restaurant. And in respect of the holiday Batman lets them finish their meals before the police storm the restaurant.

In the second story the Penguin attacks a thanksgiving parade, protesting against the wholesale consumption of turkeys during the holidays. Batman and Robin take him down and then return to Wayne manor to enjoy thanksgiving dinner with the rest of the family.

The Review
I often have trouble reviewing books that I like. Generally I end up saying a long winded version of, “Yeah, it was good.” But every once in a while there comes a series that while I initially don’t have much to say, as each new chapter comes out I find myself with more and more to say. One such series is Batman Li’l Gotham. This newish series by Dusting Nguyen and Derek Fridolfs has been coming out as a digital first with new chapters being published as they coincide with major holidays.

While this theme has been enjoyable, and in fact feels like a much lighter take on the basic concept of A Long Halloween, it does mean that the release schedule can be somewhat erratic. Generally, when there is a new holiday coming up you can expect a new chapter, but since holidays aren’t exactly consistent it does mean that when exactly new chapters come out vary by a great deal.

I think it should come as no surprise to anyone scanning my blog that I love child friendly entertainment. But only so long as it’s well written and well drawn or produced. Li’l Gotham is a prime case of a series for children that is not only well written, but also beautifully drawn. This is THE series for Batman fans to be reading, no matter what their age. Are you a fan of the Bat Family? Well, forget all the other Batman books out there. THIS is the book you need to be reading if you like seeing them all get along.

Do you have children that you want to introduce to Batman because it is the best franchise in the world and no child of yours will be a fan of anything else? But while there are excellent animated series for them to enjoy you find that the comics are far from kid friendly? Fear not, because Li’l Gotham is the kid friendliest series DC is currently publishing.

The stories, all centering around holidays of course, are light hearted enough, yet written with sincerity. Not only can they be enjoyed by children, but longtime fans of Batman will have a blast picking up on the cameos for some of the less well known, yet still loved, Bat Family members. And the little joke about everyone always forgetting about Jason is not unappreciated.

I will say though, that at times it becomes difficult to tell certain characters apart when they aren’t in costume. The big scene during the second chapter, when they are all gathered together for thanksgiving dinner, did give me a run for my money as I tried to figure out who was who. Ultimately I was able to figure out that I was looking at Bruce, Dick, Jason, Tim, Damian, Barbara, Alfred, Colin, and Katana (at least I’m pretty sure it’s her based on later chapters), but I can’t figure out who the third woman is, the one with the short black hair. I have three guesses, first off Zatanna, except I don’t think it’s her because her hair on the cover and in later chapters is much longer in the back; Cassandra is an option, except her bangs are a lot longer on the cover; my last choice would be Selina, and she would make sense considering her placement in the two panels, and her hair matches Selina’s most, except in a later chapter she looks a bit different, except I can’t be sure if that’s a slight change in the art style or what. Either way I’m going to stick with the unidentified woman being Selina, because not only does she match her the closest, but that’s who I would like it to be. If anyone else has any guesses let me know in the comments. And if Dustin Nguyen wants to shed light on this, please, Mr Nguyen, if you’re reading this for some reason, I need to know!

Tangent aside, this is not only the cutest Batman book around, it’s also the most satisfying. As a fan of Batman and his extended cast I get the most pleasure from the simplest things. Sometimes I want a dark Batman story, and sometimes I just want to see Dick feeding Barbara a forkful of what I assume are green beans.

Like the holidays themselves, it’s the small moments that mean the most. The time you can spend with your family, whether they are your real family or a fictional family you’re reading about in a comic book, really are the best times to be had. For many of us fans we’ve become so invested in these characters that we feel we know them on a real personal level. And while we all love Batman’s exciting adventures, sometimes we just want to sit back and enjoy a thanksgiving dinner with them.

If you like Batman, if you like real family friendly entertainment, then go pick up the first issue of this series, and go read the new chapters on comixology or on your DC digital comics app. And while your at it, buy an extra copy for your kids.