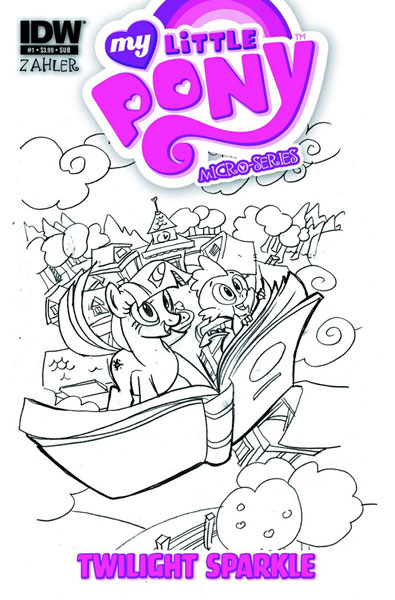 The Story
Princess Celestia calls Twilight in for a special test. She has Twilight work in the royal archives, where she serves as an assistant to Summer Mane, the head archivist. Summer turns her away, but Twilight manages to trick her into letting her into the archives. Summer tells her to stick to her work, and is generally a sourpuss. Over the course of the next few days the two get to know each other better, and Twilight discovers a secret that Summer had been hiding.

The Review
First off, I think the art is worth mentioning. Where the main series uses black outlines for the characters, the art in this first issue in the micro-series tries to match the look of the show more by matching the color of the outline to the color of the object, and then using a color a few shades darker. I get what they are trying to do, and it works in the show, but in a comic it just makes everything seem less solid. In comics the dark lines help give objects a stronger presence, hence why the art in the main comic series stands out more.

While the art in this book doesn’t imitate the show style, it does take a similarly stylized approach to the main series, and I have to say it doesn’t really work for me. I think it’s an interesting enough style for a one off book, but it’s not a style I would be interested in seeing throughout an entire series.

The story itself is basic and enjoyable enough. I think its biggest strength is exploring Twilight’s bookworm side. Sure we are aware that she likes books in the show, and she mentions them a few times, but we don’t ever really get to see her discuss books with a fellow book fan. Rather we see her as outsiders would, aware that she loves books, but unfamiliar with the specifics. So if nothing else, this book is definitely enjoyable enough for fans of the show.

The plot twist at the end of the story was predictable, and after a certain points all plot twists are predictable. However, if predictable plot twists worried me, I never would have gotten as far as I have in the show. While Summer’s secret was expected, writer Thomas Zahler does a good job of not making a very big deal about it when he introduces the first hint. It’s there to be seen for anyone paying attention, but he doesn’t hang a giant sign above the hint and give it away through sheer obviousness.

The final feature worth mentioning is the cover. At least for the one that I got, it was a coloring book cover. Which, while a bit odd, was a cute little feature that I don’t imagine any collectors will be coloring in. So if they have this one available in your store, grab two, one for yourself, and one for any kids that want to color it in. Or, just scan the cover and then print a coloring page out. I’d be interested to see if there are any good artists out there that have colored their copies in.

So, overall, not exactly a necessary buy, but an enjoyable read. It functions more like an episode of the show, with a self contained story. So as a one off, additional bit of Pony storytelling you can’t go wrong  with it. That puts fans of the show at two issues of Pony comics every month while we are between seasons. And even mediocre to good stories are worth spending a few minutes on every month. This micro-series isn’t a crucial buy, but I would still recommend it to fans for whom the regular series just isn’t enough.