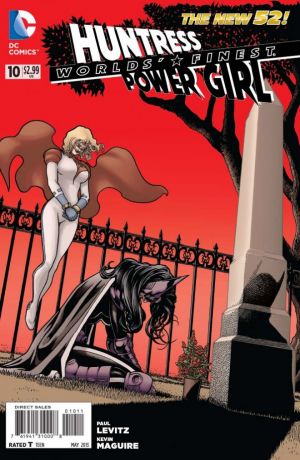 The Story
Kara Jor El and Helena Wayne use their skills to try and find a way to return to their home dimension. Their search for a way home leads them to face off against many foes, and many possible allies. Sometimes they work alone, sometimes they work together, but each has their own backstory and issues to deal with. Each has their own approach to the problems they face.

The Review
First, let me talk about what I like about this book so far. I’ve been quite enjoying Helena’s part of the story. Huntress hasn’t been one of the characters I was exactly invested in. And after she was no longer Helena Wayne pre-New 52 I really never found a reason to care about her. Tying her into Power Girl’s origin, and return her to her pre-crisis identity as Helena Wayne was a great way to get Batman fanboys such as myself invested. This book seemed like a godsend. Power Girl AND a Huntress that is Batman and Catwoman’s daughter? Sign me up!

And I haven’t been disappointed with Huntress’s story. While she has not had any interaction with Batman, I look forward to see how that will be handled. I very much enjoyed the issues with her and Damian together, and am more than a little sad we won’t get to see that again. I would be overjoyed if Helena made her way into the main Bat books at some point.

The flashbacks to Helena’s childhood have been a lot of fun, and a treat for anyone that is a fan of the Bat and the Cat together. Ultimately it ends in tragedy, but that doesn’t mean that the scenes between the Wayne family can’t be enjoyed for their own merit.

What I am not a fan of is Power Girl’s characterization. I first got into the character during Amanda Conner’s run as the artist for the character. That Power Girl was fun and quirky, a bit darker than her alternate universe cousin, and while she looked like a comic book woman’s comic book woman, she still never stooped to the hyper sexualized levels of some comics of less repute.

Again, I don’t mind characters sleeping around. What I do mind is that when such characterization is the anti-thesis of any prior characterization. Granted, my experience with the character is limited to Conner’s twelve issue run, so perhaps Karen has been like this in every other version of her character. But I really, really, really liked the version Gray, Palmiotti, and Conner created. I was hoping to get more of that in this series, but unfortunately that has not been the case.

I’ve been hearing a lot of praise for Pérez’s artwork, but to be honest, I wasn’t a big fan of it. There’s just something about the way he draws the characters that doesn’t sit right. His take on Damian made me laugh more than once, and made me consider submitting undoctored scans of Damian’s poses to the Hawkeye Initiative.

My other biggest problem with the book is Power Girl’s costume. Yes, her original costume was ridiculous. No, I don’t care if they cover up the boob window. But to replace an iconic part of the character with a design that was less than inspired just did not work for me. Again, she didn’t look like Power Girl, she looked like some blonde chick decided to call herself Power Girl and then didn’t even bother to get the costume right.

I’m glad Power Girl is going back to her classic look, though this is an issue that is really hard to be excessively happy about, without feeling like a pervert. It’s not about having the character show more skin, it’s about the current design looking nothing like Power Girl. If I had been shown a picture of her in her current costume, without being told who she is, I would have never known it was Power Girl. I feel like there must be some kind of happy medium. Where Power Girl doesn’t have to go back to her skimpytastic costume, but she still wears one that at least maintains a consistent theme.

Overall, half of this book I really liked, the other half I could have done without. I’ll keep reading to see where this book goes with Power Girl, though I don’t expect I’ll be looking forward to the coming storyline, where Huntress and Power Girl’s involvement in the story revolves around the fact that the latter had an affair with Mr Terrific.

Now if you’ll excuse me, I think I’ll go reread the Gray, Palmiotti, and Conner run on Power Girl.