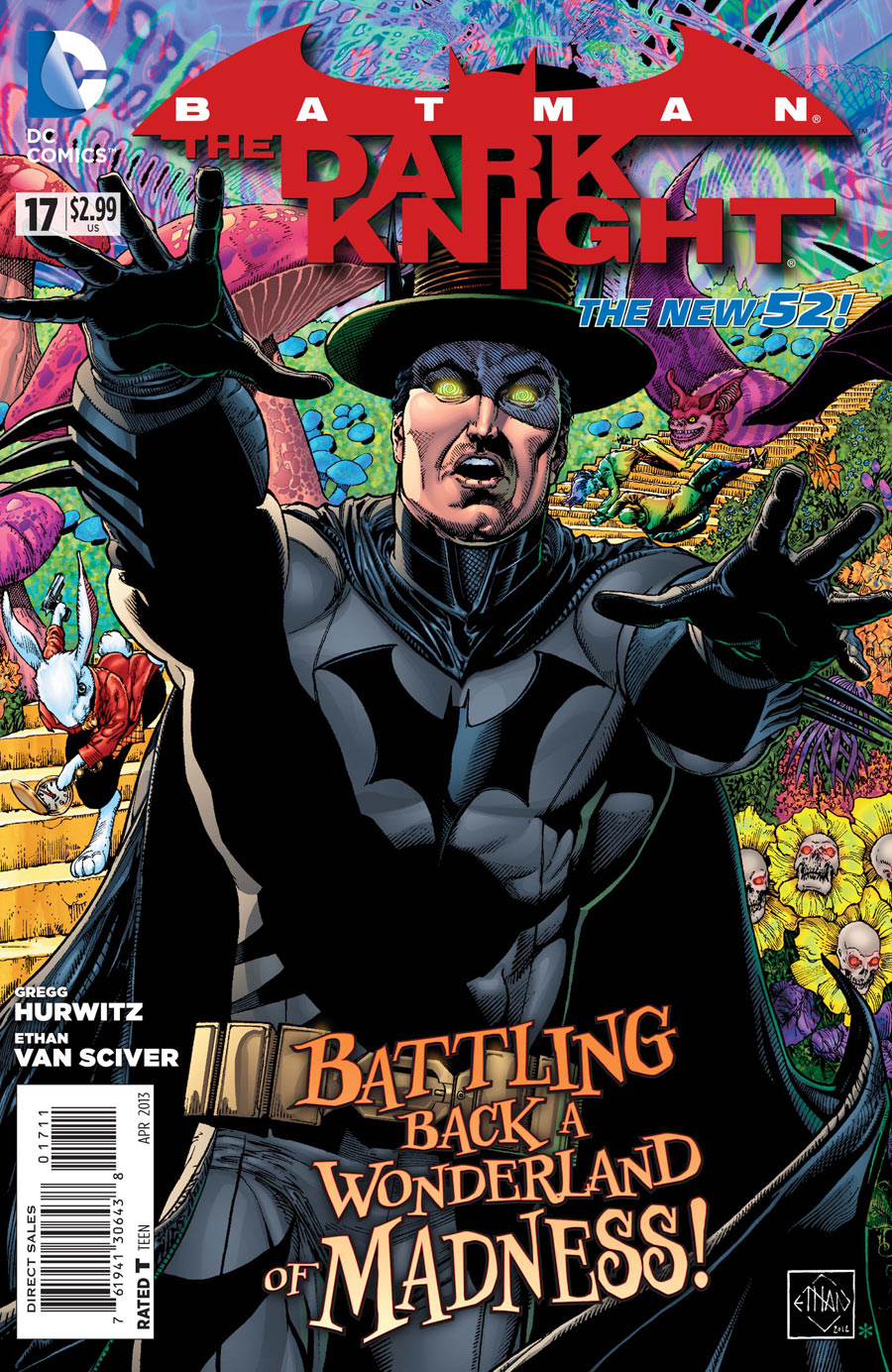 The Story
After Batman breaks free from the Scarecrow’s trap, the Scarecrow turns to the final phase of his plan—gassing Gotham city with his new fear toxin. From a zeppelin. The entire city becomes a disaster area, and while Batman is trying to contain the chaos he discovers that he is immune to the new formula. Figuring that his blood has the necessary antibodies to create an antidote, unfortunately it would take days to create an antidote. With no time left, Batman decides to spray his own blood over the city to counteract the toxin. It almost kills him, but he succeeds.

In the story beginning with issue sixteen, the Mad Hatter has been kidnapping people and casting them in parts from Alice in Wonderland. Batman tracks the kidnappings, trying to find where the Mad Hatter is, but as of the latest issue he has not found him. In the meanwhile, Bruce and his girlfriend Natalya break up.

The Review
First off, allow me to say that if nothing else, at least The Dark Knight is the one book that is using a wider selection of Batman’s rogues’ gallery. While at the same time, I have to confess that some of the characterizations of the two villains is a bit odd. Scarecrow was made possibly more gruesome than necessary, though that can be up to personal preference. While the Mad Hatter is a bit more psychotic than I am used to. It feels like there are so many new psychotics popping up in the Bat Universe, that seeing the Mad Hatter demoted to just another homicidal maniac is a bit disappointing.

But, first, I should talk a little more about the end of the Scarecrow’s story. I was still bothered by that little girl. She felt far less like an actual child, and more like a blatant force acting upon the characters. She wasn’t there to be a character, she was there to introduce doubt that the Scarecrow is really as bad as he seems. And for all intents and purposes she was far too blatant to really accomplish that job successfully.

The final conclusion to issue fifteen was…odd. I may not know much about science, or antibodies and antidotes. But I’m pretty sure antibodies don’t actually work by spraying them on people. Otherwise, why would they need to be converted to an actual antidote? And just spraying his blood on the people? Yeah, I can’t say I buy it in the slightest. This book is one that I feel would be better off if it sticks to Batman fighting against his psychotic foes, and doesn’t try to get too scientific. Or at least when it does try to be scientific, try and stick a little closer to the realm of reality.

Finally, the one part of this book that made me role my eyes the most was how it handled Natalya. I already know that Batman has had many, many romantic interests over the years. And only two or so have stuck around in the mythos. I have a hard time believing that Natalya is somehow meant to be different from the others that have come and gone. No matter how hard the characters try to make her seem like she is more important than she is in the long run. Trying to introduce a new romantic interest for Bruce, and having her stick, is a battle lost before it is begun. Comic readers are even more cynical than I am, and I highly doubt any of them were convinced for a moment the the piano player would actually mean something more than the leader of the international crime syndicate, or the cat burglar with a fetish for leather and latex.

Overall these books have been enjoyable, but there were enough annoying elements that I can’t consider these issues as better than just good.