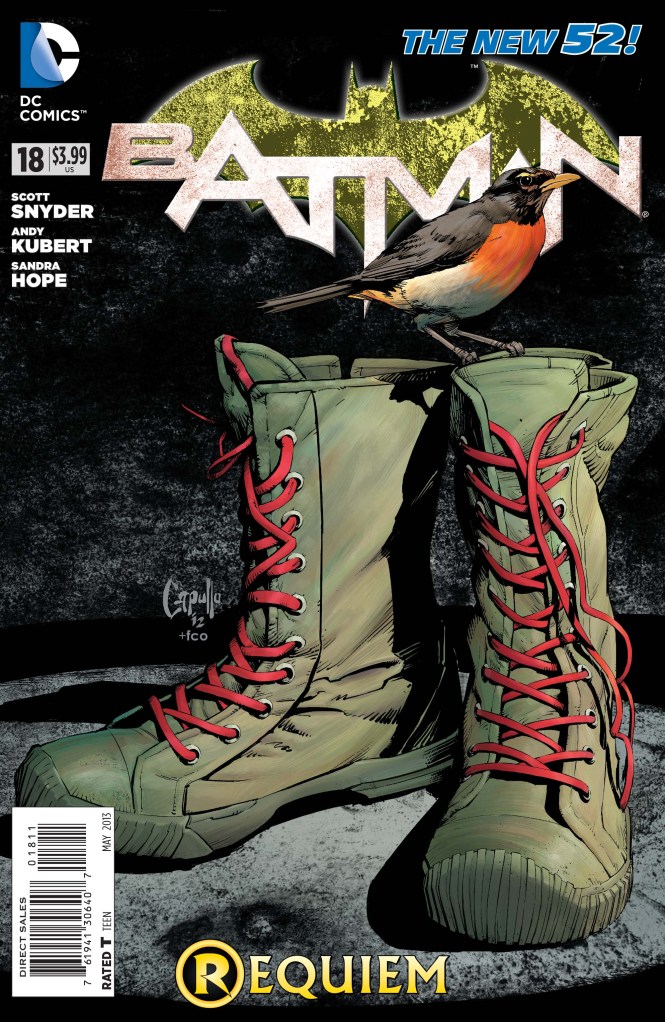 The Story
Batman’s reaction to Damian’s death is told from the point of view of Harper Row, who since her last encounter with Batman has been training to be able to follow and help him when necessary. And with Batman driving himself to exhaustion, to the point where even regular criminals are getting close to getting the better of him. Harper helps Batman during a crucial moment, but is scolded for helping where she is unwanted.

After meeting with Bruce Wayne, to set up a display in Wayne Towers meant to motivate Batman, Harper and Batman are somewhat reconciled.

The Review
I have three problems with this issue. The first being that while Scott Snyder’s wordiness usually doesn’t bother me, in this case I felt that the excessive description throughout the issue was to the detriment of the story being told. Part of me wonders if Snyder is begrudging Morrison for stealing the spotlight from him.

The second problem I have is that the parallels between Harper and Tim Drake are very heavy handed. Personally I wouldn’t mind seeing her as the new Robin, she’s an interesting character, but I would like to see her adopt the role in her own way, not by emulating any existing Robins.

The third problem is the art. While the art itself is good, I find myself missing Capullo’s art. I like his style for Batman most of all, so seeing him absent from this issue just made it a little less enjoyable than it would have been. It’s not really a commentary on the quality of the issue itself, but rather a commentary on my own preferences.

I like the approach the book takes to the story, telling it from the point of view of someone that doesn’t know what Batman is going through. But I for one am an advocate for letting comics be a visual medium, not novels with pictures under the text. The pictures should do most of the storytelling, and unfortunately far too much of the story is coming across in this issue.

I really think that readers can be trusted to make the necessary connections the plot requires, without having them shoved in their faces. The scene with the dog breeder enhancing his dogs with venom was particularly egregious. Your average Batman reader knows what venom is, and doesn’t need the villain to tell us what he’s doing. Neither do we need to know the psi of the dog’s bite. The pictures would tell the same story without the dialogue. The idea is as simple as, “Big muscley dog enhanced by venom BAD.”

Overall, I liked this issue, but it wasn’t Snyder’s strongest issue I feel. There is a definite sense here, and with other books, that the writers are being forced to tie the events of their books into Morrison’s book. Whether there is any resentment on that part I can’t say, but each book seems to be dealing with the events differently. Some barely mention it at all, and some seem to be going overboard by making the entire issue just about the aftermath of Damian’s death. Perhaps I am reading too much into it, but I can’t help but feel that Snyder may not have been putting forth his best effort with this book.