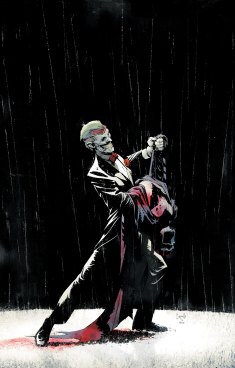 With the Joker wreaking havoc on Gotham, Batman tracks him down to Arkham Asylum, where he faces the Joker, only to find himself caught in the madman’s trap. When he wakes back up Batman and the rest of the Family find themselves trapped at the Joker’s table and his gruesome feast prepared before them.

The Review
I’ve decided that I have gotten so far behind in these reviews that I need to do what I’m doing for all the anime reviews I’ve been meaning to write. Namely read everything and catch up and then just write a larger review for everything I read. While this goes against my preference of having one review per episode or issue, I decided that right now this blog is in a bit of a slump, and the only way to really get out of it is to just catch up on everything I’ve been missing. And the only way to really do that is to just cover multiple issues per review.

Originally I was going to review the issues based on what month they came out, so I’d review everything that came out in December, then January, etc. The problem with that was I couldn’t remember which issue came out when, and the way DC organizes their months makes no sense. Can anyone explain why issue sixteen of Batman is considered the March issue when it came out in January?

That aside, I expected to be caught up before the finale of Death of the Family, but here we are, the review unfinished before issue seventeen came out. So I suppose I can just talk about the entire storyline. Ultimately I have to say that I quite liked it. There were some hiccups here and there, such as the Joker apparently being omnipotent where the plot requires it. So much setting up had to go into his plans that I have a hard time imagining even the Joker could pull it off. The art and story in general is fairly gruesome, and while that does not bother me specifically, I have to say that it is a downside of an otherwise solid story.

In the end, was this a satisfying Batman story? Was it a satisfying rendition of the Joker? That’s what I’m having trouble figuring out. On the one hand I feel that cutting off his face was done more for the shock value than anything else. And while it was certainly gruesome, this story makes me wonder, “What next?” We all know the Joker won’t stay away forever. But where do you take him from here? I trust that Snyder, or whoever picks up the Batman book after him, will think of something clever. At the very least I hope he gets his face back, having his face cut off would get tired after a while.

I found the conclusion to the story a bit lacking. DC has been building this up as a horrifying tragedy, and while it certainly was horrifying, I felt that the final punch was pulled. I figured Alfred would not die, but the buildup to the point certainly was suggesting that. Seeing the Family’s faces on ice certainly was a terrible image, which makes it all the stranger that Joker did not actually cut their faces off. I can understand that he would think it’s all a big joke. But what’s stopping him from actually cutting their faces off as a different kind of joke? In the end, while I don’t think I would have liked them to actually be mutilated, it did feel that in the end DC decided to play it safe.

Also, what’s up with Bruce revealing who he is to the Joker after finding the card? I understand it was to make a point, to show that the Joker doesn’t care who Batman really is. But it was still a dumb move on Bruce’s part. And why didn’t he tell anyone that’s why he knew the Joker didn’t know or care who they were? Unless he realized it was a stupid thing to do.

As a final note, while I haven’t read Batman Incorporated and can’t comment on its quality, I have thought the idea itself was counter to the Batman mythos. And this storyline showed exactly why it was a bad idea. Part of the mask is to protect those close to him, and while those are few in number, by associating himself publicly with Batman Bruce puts people like Alfred at risk.

Still, this was a great story, and well worth the investment. I highly recommend checking the back issues out, or getting it when it comes out in trade. Or do both.