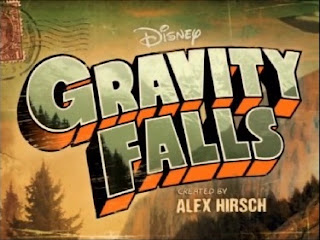 The Story
When Stan goes too far in controlling his employees and
duping the customers, Mabel steps in. The two make a deal that if Mabel makes more money than Stan while he is on vacation for three days, she will
become the boss, and if Stan wins Mabel has to wear a humiliating T-shirt for the
rest of the summer. 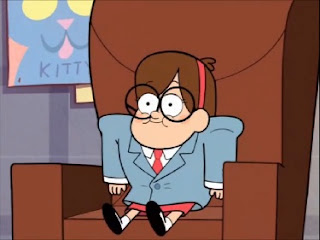 However being the boss is not easy, as Mabel learns that
trying to be not-so-bossy only makes things worse. From letting Wendy hanging out
with her friends, to letting Soos try out his idea of being the shack’s mascot, to having Dipper find an actual real magical attraction for the Mystery Shack.
The Review
Have you ever had a show you really loved watching that you
could not wait at all until it came back on the air? Gravity Falls is that show
to me. There has been no other show where I have re-watched the first ten episodes
more than five times. It is that good. 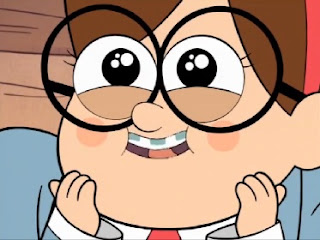 It’s thought that when most shows go on hiatus, when they
return, the quality drops. Not this one. Episode thirteen manages to keep the spirit
of Gravity Falls going by having the focus be on the five characters (except for Wendy but that’s Wendy for you). 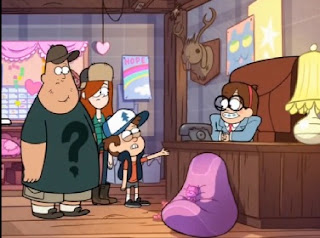 The episode does it so well when it pointed out a specific
point in the beginning about Stan and comes back around near the end and in
between, it made his character more lovable. Don’t get me wrong now, he would
be a horrible man in reality but as one of the central characters of the series,
he is by far one of the best, especially when he got onto a parody of a popular
game show. 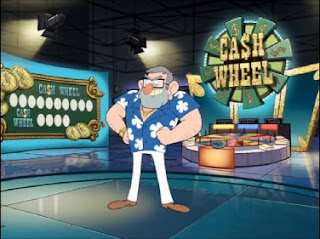 Throughout the episode, there were some noteworthy
hilarious Gravity Falls moments. I feel however that Wendy’s potential is
being wasted on the show other than being Dipper’s crush a while ago. The part
where her friends were playing hacky sack with a shrunken head and Mabel
walks in on them that point was the obvious ringer to that something bad was
going to happen… 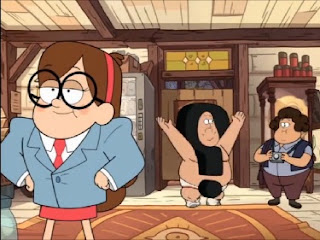 Soos’ trying to be the store’s mascot was funny along with
the introduction of the Gremloblin that Dipper caught which later led to my
favorite scene in the episode. 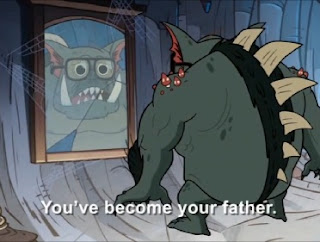 Overall the episode wrapped up really nicely with a bit of a
twist and referred to a foreshadowing from the beginning of the episode. I
enjoyed the episode, enjoy the show, and marvel at the writing done for it. I’m
glad to be back in Gravity Falls again. 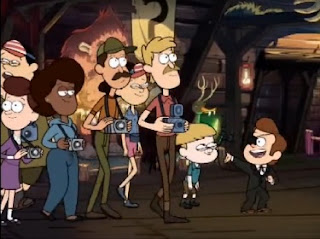