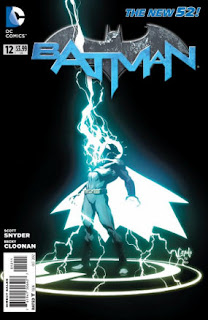 The story focuses on Harper, and her brother Cullen, as the two are persecuted by thugs for Cullen’s orientation. Harper tries to fight back when the thugs corner her and Cullen, but the two are beat until Batman arrives and saves them. After that Harper uses her job as an electrical engineer to help Batman maintain his city wide network, despite him telling her to not get involved. The story ends with Harper promising herself that she would not stop doing what she could for Batman.

The Review
For a book called Batman there was surprisingly little Batman in it. The entire focus, minus a few pages, is given to Harper and her brother. And it’s absolutely glorious.

This is the first book of the New 52 that truly captures the appeal of Batman. As fun as it is to see the caped crusader fight super villains, too many of those stories lack the focus this one had. The story wasn’t about Batman, it was about the people of Gotham, and the effect he has on them. THIS is what the last two to three issues of Batman and Robin should have been like. THIS is the most effective use of Batman I’ve seen in a while. Not as a person, or as a character, but as a symbol.

The entire story focuses around the plight of these two siblings, culminating in a moment where, as I was reading, I was imagining myself stepping in to save them. Then Batman arrived, in that perfectly cathartic moment. It didn’t matter that him being right there at the crucial time is completely unrealistic. That’s not what is important. What’s important that I’m rarely as pumped about seeing Batman beat thugs as I was reading this. Super Villains are all good and fine, but at his core Batman is meant to appeal to the part of us that wants to go out and beat up criminals. And this story perfectly exemplifies that.

Seeing the story from the point of view of a normal person helps solidify the Batman mythos. It’s hard to truly see the effect he is supposed to have if we’re always in his point of view. Seeing him as the near mythical figure he must be in Gotham was fascinating.

Surprisingly enough, Harper, and Cullen to a lesser extent, is a well fleshed out character, interesting to read about in her own right. The entire drive of the story, after Batman saves her and her brother, is focused around her obsession with helping Batman, and discovering his hidden network in the Gotham power grid. This helps build how he does what he does, while at the same time tying Harper into the story. Her motif focuses around her work as an electrical engineer, from her past family life, to her future.

As a one off story this issue was great. I wouldn’t mind a few more like this, nor would I mind if we continued to follow Harper. Either way, this issue was well worth my money.