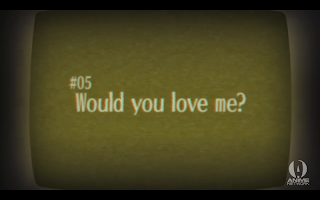 Introduction
In a strange move the anime decides to pull a plot thread from later on in the game to the foreground. Is it a good decision? Who knows, but it makes for an entertaining episode.

Plot Summary
A girl confesses to Yu on the rooftop, though it’s really more like she coerces him to be her boyfriend. Skip back to a few days prior, and Chie is taking Yu to the basketball team to help them out while they are short on players. The team captain, Ichijo, introduces Yu to the rest of the team—those that haven’t left yet—as well as Ai Ebihara, the team manager. Ai tells Yu not to ask her to do anything, and then leaves, along with most of the team, before doing any of the cleanup. 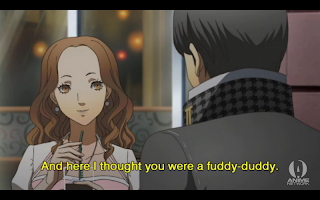 Back at the Dojima home, the young detective Adachi comes home with Dojima for dinner. Dojima mentions that he has time off during Golden Week, and says they should go on a trip. Nanako wants to go to Junes, and after a suggestion that they take bento lunches, Yu is drafted into making lunches for the trip. 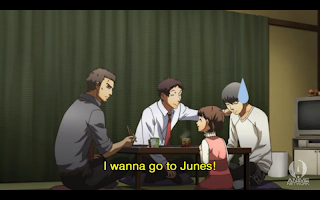 The next day at school Ai gets Yu to ditch classes with him. She drags him around shopping, using him to carry her bags. Later, at training, several of the guys on the team are discussing rumors that Ai has a sugar daddy. Ichijo tells them to knock it off, but she still hears them talking. Yu checks to see if she is okay, but Ai is happy that Ichijo defended her. She reveals that she has the hots for Ichijo, and asks Yu to find out if he has anyone he likes. When Yu asks Ichijo about it, he reveals that he likes Chie.

Heartbroken, Ai tries to jump, but Yu pulls her back from the roof fence. She reveals that she used to be fat, and worked hard to lose weight and become fashionable, so people wouldn’t make fun of her. But after changing herself, people still thought ill of her. She forces Yu to go out with her, threatening to kill herself if he doesn’t. 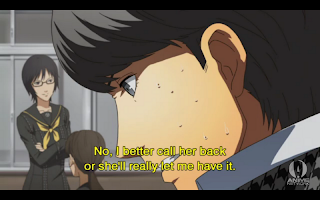 She proceeds to force him to skip class, and hound him at all times. When she calls him after class he immediately hangs up on her, but calls her back right afterwards, afraid she’ll be pissed at him. Chie is pissed that Ai is hogging Yu all the time, since they can’t get any investigation done without him around. 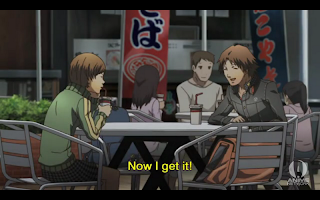 Yosuke thinks this means Chie is jealous of Ai, and tricks her into becoming the team’s second manager, to get her into the fight for Yu. Ai thinks that Chie is there for Ichijo, and gets pissed. Ichijo tells Yu that his family doesn’t like him playing basketball, so he will quit the team after the next game. If they win he plans to tell Chie his feelings.

Since there are so few players on the team, Yosuke is drafted into playing. Ai and Chie get into an argument in the middle of the game, each of them confused about why the other is fighting. Yu tells them to stop fighting, since this will be Ichijo’s last game. They lose the match, so Ichijo remains quiet about his feelings. But he tells the others that the game made him realize how much he loves basketball, so he decides to keep playing. 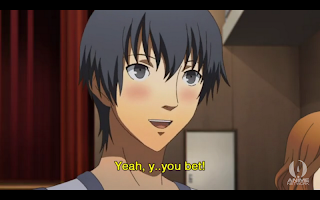 Ai decides to free Yu from being her boyfriend, and goes up to talk to Ichijo, making an effort to get closer to him. Afterwards the four protagonists meet on the roof, finally ready to start investigating the murders again. 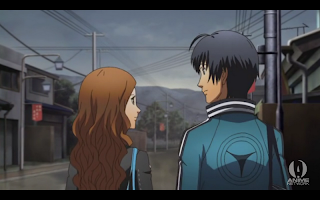 My Opinion
I loved this episode. Yu’s strange character was further developed, and I love the direction the writers are taking him. His deadpan reactions to everything work perfectly, giving him more personality rather than less. He has a strange sense of humor that works well with his deadpan delivery, such as when he calls Ai ‘Ebi’ (shrimp). 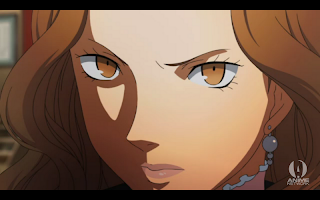 Previous episodes have hinted at his personality, but this episode was where he really shined. The writers have a clear direction they are taking his personality. His lack of extreme emotional reactions connects him to his origin as a video game protagonist, where the players are meant to project a personality on him. But the writers obviously know that doesn’t work in an anime, so they write him in a way that calls back to his roots, while still giving him an actual personality. 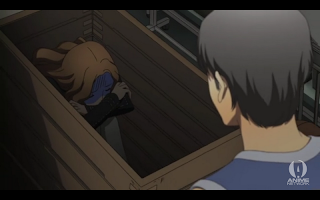 I like Ai’s backstory, I can’t remember if it’s the same as it was in the game, but it’s a well made backstory that makes sense for the character. She’s incredibly needy, which makes sense considering she used to be fat and probably still has body image issues, to the point where she will use emotional abuse to get him to do what she wants.

The questionable behavior aside, the rest of the episode was nothing if not hilarious. Ai comes across as surprisingly real, if insane. 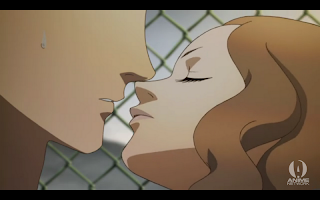 Also, looks like we know why Saki had to die. There’s only room for one person with that character design in this anime. 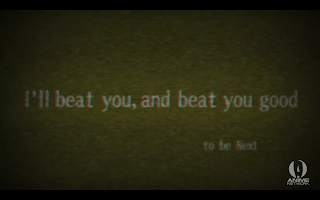