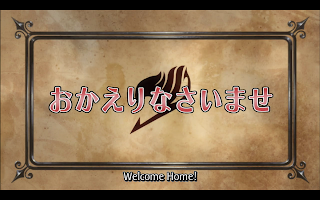 Edolas Natsu, who is a complete wuss outside of his car, drops Natsu and group off at the capital city.  They explore the place for a bit, realizing that despite the magical shortage in all the other places they’ve gone, there is plenty in the capital city.  They find the lachryma crystal their friends have been converted to, and are dismayed to find the entire city rejoicing over the death of everyone trapped in the crystal. 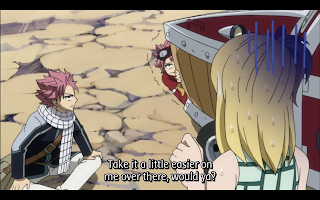 Lucy stops Natsu from going on a rampage, and later the group try to think of a way to save their friends.  After Lucy realizes that she can use Gemini to imitate the king and find out how to turn their friends back to normal, Charle shows them a map she drew of a secret entrance into the palace. 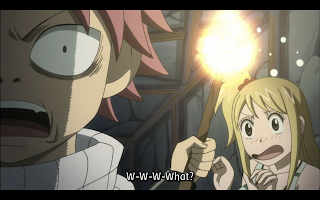 They find their way through the tunnel, but are captured by the royal guards, led by Erza Knightwalker.  The episode ends with Erza and the rest of the guards bowing to Happy and Charle, welcoming them home. 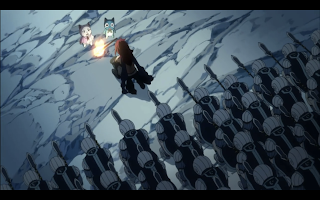 As a whole this was a solid episode, though it did slow down immensely between the point where they reach the cave, and when they actually enter it.  But besides the obvious padding for time the rest of the episode is great.  The cliffhanger hints at an answer as to how Charle knew so much in the first place and definitely grabs the viewer’s attention.  The scene where Natsu and group have to watch as a whole city cheers their friends’ demise is particularly poignant in how horrifying it is.  It’s also a chance to see the characters interact on a deeper level.  For a show where most problems are solved by breaking a ton of crap, it’s nice to see a scene that focuses on the emotions of the characters.  Anger, frustration, despair, it’s all wrapped up in a nice little package and could easily be one of my more favorite scenes for this show. 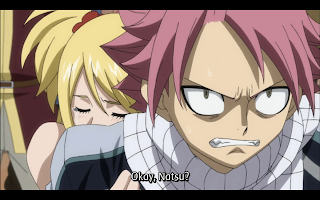 All in all this arc is definitely a nice change of pace from the usual.  More seems to be at stake for the characters on a personal level, and things can only get more intense from here on out. 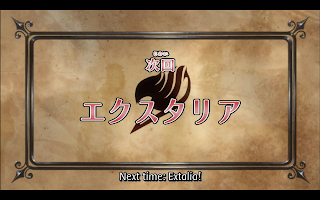