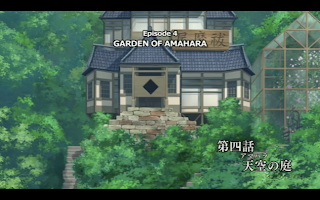 Rin convinces Yukio to take him along on an assignment.  Before going there, Yukio goes to an exorcism supply store to restock on supplies.  He tells Rin to wait for him, but it doesn’t take long for Rin to wander off.  He finds a garden behind an elaborate gate and sees a girl planting flowers inside there.  When the demon ward on the gate goes off, Rin has to explain that he isn’t a demon…sort of.  The girl, Shiemi, tells him about the garden of Amahara, where all the world’s plants grow.  Her mother and Yukio come to check on her legs, which Yukio suspects might be infected by a demon.  After Shiemi faints she has a dream of when her grandmother died, and she talked to a garden sprite that promised to help her save her grandmother’s garden if she never left.  Rin confronts her about her actions, and after realizing that the guilt she carries is the same as the guilt he feels over Father Fujimoto’s death, he decides to help free her from it.  By smashing her plants.  After Rin promises to cut the demon out, Yukio comes and tells them that the demon is small-fry, and he can exorcise it in a moment.  The demon turns out to be more powerful than thought, and it takes Shiemi hostage.  Rin and Yukio work together, and are easily able to dispatch the demon. 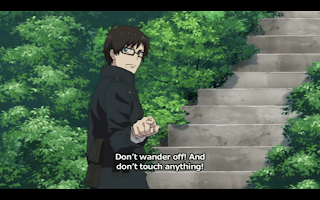 While I enjoyed the chapter this was based on in the manga, it felt a little slow the second time around.  That’s not to say it’s a bad episode, but compared to the more action oriented episodes something about this one felt off.  It’s still very enjoyable, and well put together, but I think at the time I watched I was looking for something a bit more actiony. 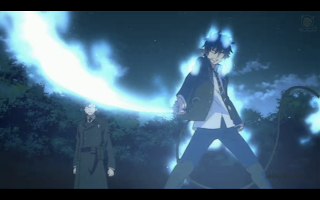 The music continues to be top notch, and the action, what little there was, is well animated.  We get to see more locations, which are all elaborately designed and help add to the look of the show.  Where it lacks in the action department, this episode makes up for it in the heart-wrenching storytelling department.  Though there are times when I can’t help but think, I know this is meant to be sad, but for some reason I can’t get myself to care.  I guess part of the problem is that it’s a text book sad story, and while it worked okay the first time, the second time around it just doesn’t have the necessary impact. 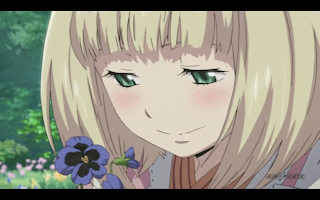 On the other hand, Shiemi is a character I can care about quite a bit.  She had her annoying parts in this episode, but was also very entertaining, especially her interaction with Rin.  I think she’ll be one of my favorite characters from here on.  She manages to be charming in a very naive sort of way.  Even when she’s dead right in her assumptions.  She kind of reminds me of Orihime, in a toned down sort of way.  Which of course means all the fans are going to hate her now.  If I did video reviews, this last line would have been delivered with a dead-pan expression.  Just so you know exactly what I think about people like that.  Also, I’m suspecting a love triangle in the future.  Not sure whether to be excited or not, because those can either be the best or the worst part of a show. 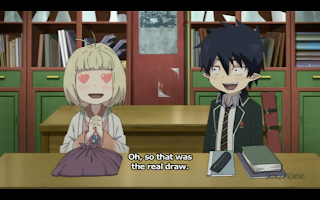 This episode is the last of the ones based on chapters from volume one.  So from here on out we’re flying blind.  I’m pretty excited.  I bought the manga because I wanted to see what happened after the first episode, and now I’m going to be watching the anime to find out what happens next. 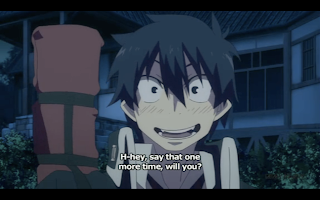 And because I can’t help it, I have to mention that Amahara sounds suspiciously like the land based version of the All-Blue from One Piece.  Not that I’m saying this is a bad thing.  Just pointing it out.  You know, just sayin’. 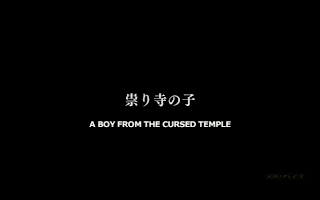