In light of there being no Beelzebub anime to review this week, instead I’ll be giving you a quick look at two graphic novels I read over the weekend.  The first is the second volume of the Mouseguard series, and the second is the graphic novel adaptation of The Amulet of Samarkand.  One is good, and the other is a disappointment to the medium.  I’ll let you find out for yourselves which is which. 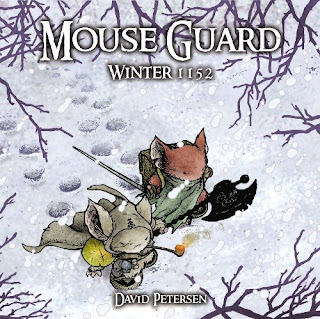 The first is the sequel to Mouse Guard – Fall 1152. I really like the first book, it was simple and short, but so imaginative in its mythology and art direction that I couldn’t help but love it.  The Mouse Guard series is by no means a long read.  Any reader with a decent pace can finish it in less than an hour.  But that isn’t what appeals about the books.  To really get the full experience time must be taken to savor the art.

Much like Brian Jaques’ Redwall series, the main characters are all animals.  They are all very distinct, without falling into stereotype tropes, and are the driving force of the narrative.  I must confess, I did in fact find myself caring about romance between mice.  I’m a pretty die-hard romantic, so sue me.

The story is very basic, with none of the threat of epic war.  Winter has fallen and the guardsmice have to gather supplies from other towns.  But when one is a mouse the dangers are many, even if one happens to be a mouse with a sword.  I would almost say that the story is far too simplistic, and that the art composition that adds so much to the atmosphere also takes space away in which a proper story could be told.  But the only reason I’d say that and mean it is if I thought it was a detriment to the comic book.

Mouse Guard – Winter 1152 is one of those books where the atmosphere created by the art is a part of the story.  What little time it does spend with the characters it does not waste, and the story that is focuses on the important dramatic points.  Overall it is an enjoyable read, if not a substantial one.  If you read it I suggest judging it more as art than literature; the story may be minimal, but I would rather consider it poetic in its brevity.  The whole book is a combination of art and story which, while tending more towards the art side, is a fulfilling experience.  Mouse Guard is definitely one of the graphic novels I would recommend to those for whom mainstream superhero books have fallen out of grace.

I highly recommend picking this one up, along with the first volume––the review of which can be found here.  David Petersen has created something beautiful, and I refuse to let him sink under the weight of a mainstream dominated marketplace.  Go out now and buy both books.  I’ll be doing the same thing…just as soon as enough of you buy it through my link so that I can finally afford my own copy. 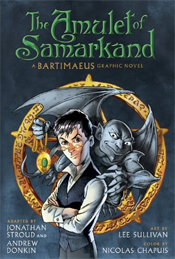 Since I already reviewed the book this graphic novel is based on I won’t be going over the plot much.  The plot is really the exact same thing as it is in the book, as most good adaptations tend to be.  The problem lies in the fact that the plot line is not the only thing kept true in the adaptation.

The Amulet of Samarkand fails as an adaptation because it fail to adapt the story to the new medium.  Like far too many other graphic novel adaptations of novels all Andrew Donkin did was take the narrative and prose from the book and paste it over some pictures.  I will give him that he cuts out a lot of introspective parts in favor of only the essential bits, but it still leaves the reader with far too much to read.

Normally I wouldn’t complain about having a lot to read, but something about comics just makes me not want to read a wall of text.  I enjoy Bakuman for its extensive exposition, but in this case it just didn’t work.  Graphic Novels are a visual medium and should be treated as such.  It is definitely not okay to insist on taking action describing prose from the book, instead of letting the pictures do all the talking.

The art is so so, it’s a good enough art style, but not put together all that well.  Lee Sullivan crams far too much into the pages, ending up with a jumbled mess.  The worst part is that it just feels cobbled together, there’s no soul in the presentation, no creativity.  There are only two parts I’ll give him credit for; the first is the scene where Nathaniel’s master pics him up from the ministry.  Most of that is done almost entirely without dialogue, and by its minimalistic nature it succeeds.

The second part of this book that was done right is the cover.  I’ll be honest, that’s part of why I picked it up.  I saw the name, remembered that I did in fact like the book, and the cover actually looked pretty interesting.  What I found when I opened it on the other hand was incredibly disappointing.

In summary, this graphic novel fails to take advantage of the graphic aspect of the medium, insisting on describing things that should instead be seen; and fails to surpass the artwork of even Boy’s Life comics.  The narrator’s voice of Bartimaeus was one of the strong points of the book, but it has no place in a graphic novel where it tells the action, rather than letting the pictures do the showing.  If you want to read this story, go pick up the book rather than this.

Or if you want to see if it’s as bad as I say, then buy it from Amazon.  Remember, every time you buy something from Amazon after clicking one of my links––even if it isn’t actually the link you clicked––I get money.  And we must never forget; I like money.

The Amulet of Samarkand (Hardcover)

The Amulet of Samarkand (Paperback)