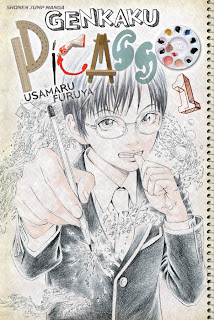 Merry Christmas to all, now have a very unchristmasy magna review.  I actually got my copy of this manga from the wonderful Katherine Dacey, at The Manga Critic (I’m not brown-nosing, I just like people who give me manga).  So I guess the fact is that this manga was a gift, and giving gifts is christmasy.  So without further ado, enjoy.

Genkaku Picasso, by Usamaru Furuya, isn’t something I would usually read.  One look at the cover, and a quick read of the blurb on the back (if I even bothered to read it) tells me everything I need to know, and inevitably leads to me putting it back on the shelf.  It’s far too artsy looking, and the basic premise isn’t anything new.  But since I already own the first volume I couldn’t just leave it there with out giving it a read.

Picasso is a major nerd, with an obsession for Leonardo Da Vinci, and a serious persecution complex.  He spends all his time drawing, and hanging out with Chiaki, though the latter is against his will, and lamenting how picked on he is.  Of course he isn’t actually picked on, from what we get to see early on nobody really picks on him, it’s just how he perceives it.  Again, reminding me of myself, and hindsight is a bitch.

Chiaki dies in a helicopter accident within the first dozen pages.  Note that she isn’t in the helicopter when it happens, but that the helicopter lands on her and Picasso.  Now I know that something simple like a car accident has been done to death (sorry), but it has the advantage of being realistic.  When your death rivals the death of the mother in Le Fabuleux Destin D’Amelie Poulain, then you’re trying too hard to be original.

While Picasso mourns Chiaki’s death, he reaches into his jacket pocket for something she put there earlier for him, and pulls out a tiny Chiaki, complete with Angel wings.  We are now entering Bleach pilot territory.

Angel Chiaki tells him that Picasso died with her during the hilarious accident, but that her prayers saved him.  He gets to continue life and develop his talents, under the condition that he helps people.  Otherwise his body starts to decay.

Picasso gains the ability to see the auras of people he’s meant to help, and to sketch an abstract representation of what is in their heart.  He then uses the picture as a portal to enter said abstract of the heart in order to help them sort out mental trauma.

Since the most important part of any work of fiction is the main character, we will start our examination there.  Picasso is an anti-social nerd, with a bad attitude and selfish personality.  He’s no role model, nor is he very pleasant to read about.  However, because of how socially awkward he is, he never fails to say the worst possible thing he could say while trying to help those around him.  Such as asking a classmate if she had an abortion, or asking another classmate if he’s into S&M.  Picasso is a joke.  He has a lot to learn, and the only real reason to want to read more is to see him play the butt of all jokes.

The volume contains four stories, all of them episodic and only barely connected to each other.  As the volume progresses the stories grow ever more interesting, though not in an engaging way.  There isn’t any emotional connection with the characters, and so the stories read more like satire rather than an emotionally compelling narrative.  Overall, despite being centered around the same characters, I can’t view this manga as anything more than a collection of short stories lacking the time, or the inclination needed to create any semblance of a connection with the reader.

Furuya tries to be deep with its subject material, but in the end clearly tries more than he succeeds.  It gets a little weird toward the third story, where Picasso draws a sketch of a classmates aura, that turns out to be of another classmate of theirs in S&M poses.  Furuya tries for edgy, but in the end it devolves into a disturbing comedy.

Which works just fine for me.  I got more laughs out of this manga than I expected.  Furuya doesn’t exaggerate his characters’ features or expressions, a common comedic tool of manga artists, and instead lets situation and dialogue do the magic for him.  The comedy is downplayed, and works all the better from my point of view because of this.

The art style is a bit odd.  While the character designs are fairly basic, for some reason Furuya adds in shading on all the characters’ lips.  I’m not even entirely sure what purpose this serves.

The sketches and heartscapes, a phrase I will coin as my own thank-you-very-much, of the people Picasso helps are the real draw for this series.  Furuya uses these sequences as excuses to play around with his art, and what he produces is bizarre, yet somewhat compelling.

My final judgement of this first volume is that, surprisingly enough, I quite enjoyed my read.  It didn’t require much investment on my part, and as such I felt compelled to read more since I wasn’t being forced into the series.  The first volume of Genkaku Picasso can easily stand on its own, as well as part of a longer series.  All the stories are self contained, and are presented to be enjoyed individually or as a whole.

Normally the lack of a compelling story would be the downfall of any manga, but in this case Furuya manages to make it work for him, and create something that can either be enjoyed or ignored at the reader’s leisure.  The comic elements were unexpected, and got a few laughs out of me.  When it comes to manga I value comedy the most.  Genkaku Picasso delivered, though it was very, very weird about it.

Ultimately its biggest flaw is that there isn’t much reason to reread the series.  The gags are funny enough, but once you’ve read a joke chances are you won’t laugh as hard the second time.  The stories lack any real compelling depth, and while initially suggesting at some depth there is no ambiguity in the abstract representations of the individual psyches.  Everything is clearly explained, with no doubts left behind.  This is the kind of manga that would flourish on ambiguity, by providing a possible explanation for the imagery, while at the same time withholding some of the answers.

Genkaku Picasso is enjoyable, but plays at depth that it does not deliver.  Ultimately it fails to delve into the abstract representations of the human heart sufficiently.  If you’re looking for something deep and compelling, you may want to keep looking as any perceived depth is being used as window dressing here.  But if you enjoy a chuckle or two, even if it is a bit dark, then you could do worse than read this manga.

If you liked my review, Buy the Manga Here: Genkaku Picasso, Vol. 1