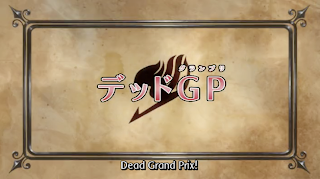 Natsu makes his way back to Erza with Happy, Charle, and Wendy when Hibiki contacts him telepathically.  Hibiki, uses his magic computer to download a map into Natsu’s head, to guide him to Erza. 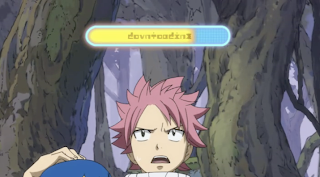 So far I’m thinking this Archive magic could be the most dangerous.  If you can upload maps into people’s heads against their will, what’s to stop you from uploading a magical virus into their head?  I would love to see a villain who uses this kind of magic.  He wouldn’t be much of a direct fight per say, but as long as he keeps the main characters at a distance he can seriously mess them up.

Now, this episode is not going to get a kind grade.  For one good reason.  The Gray vs Racer fight really just plain sucks.  Towards the end it does have its epic moment, the problem is that said epic moment is based entirely around a plot twist that negates everything Racer has done during this arc.

Allow me to explain. 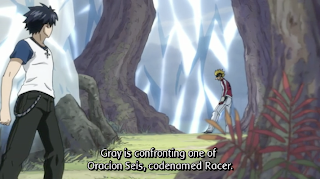 The fight between Gray and Race isn’t so much a fight as it is a motorcycle race.  Complete with magic motorcycles.  I know, I know, I didn’t expect to ever write that phrase. 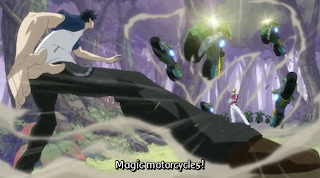 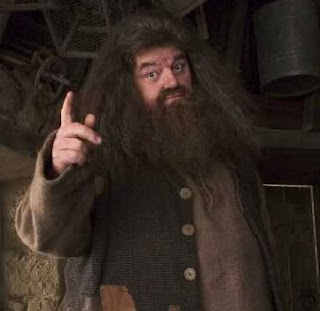 Ye’re stealing my idea.  Ye’ll be hearing from my lawyers.

Gray meets up with Lyon, and gets him to jump on behind him while he drives, and suddenly the whole thing turns into Mario Kart. 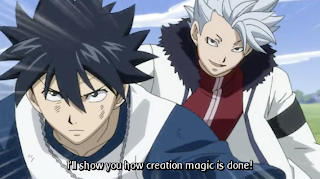 When they finally get of the motorcycles Lyon notices something about how the birds in the distance are flying.  He tricks Gray and freezes him into a pillar of ice, telling Sherry to come with him, that Lamia Scale will be taking the victory in this fight. 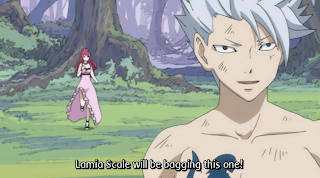 Lyon leads Racer away, taking a pretty good beating.  Finally he reveals what he realized when he saw how the birds were flying much faster than they should have been.  He reveals that Racer’s magic doesn’t make him faster, but instead slows down his opponent’s sense of time, making it look like Racer is that much faster.  The magic has a limited range, hence the birds outside of it appeared to be moving much faster than usual.  Gray attacks from outside the range, and takes out Racer. 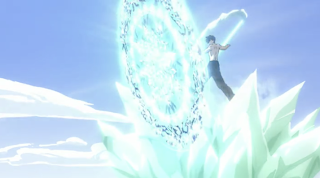 Now I’ll give the episode this, the new music playing during the climax makes for a pretty epic scene.  But new music alone, and even a cameo by Mirajane cannot save this episode. 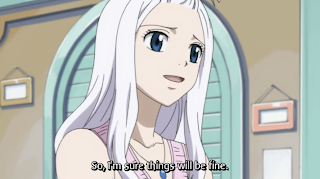 This would have been a perfectly fine plot twist, in fact it would have saved the episode from an overall boring fight.  The problem lies with the fact that it is very clear that early on Masima intended for Racer to be a straight up speed mage.  This is seen by how Racer runs and gets Jellal’s coffin from what is suggested to be a long distance away.  And since Racer’s magic doesn’t make him faster, it just makes people around him slower, he clearly could not have run all that distance using his magic. 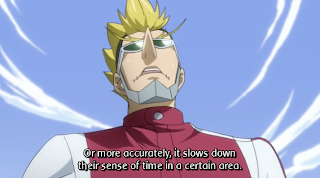 This shows that Mashima must have written himself into a corner, and came up with this plot twist to get his protagonists out victorious.  Honestly, this is the only major flaw that I’ve noticed in this series to this point and it’s a doozy.  But I guess that is the price one pays when working in a serialized medium.  This is a grievous mistake, but ultimately forgivable. 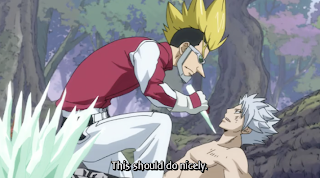 Other than that, the episode ends with Racer trying a suicide run with a bomb, and gets knocked off a cliff by Lyon, who is caught in the explosion.  Brain freaks out when he senses that Racer is dead, suggesting that there is more to this death than meets the eye.  He decides to wake up Midnight, and send him after the other lawful guild members. 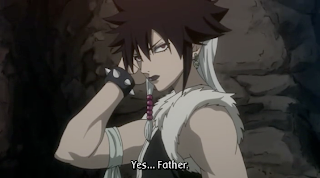 Like I said, stupid plot twist aside, this episode is just dull.  The fight is nonsensical, and takes up too much of the episode to make it salvagable. 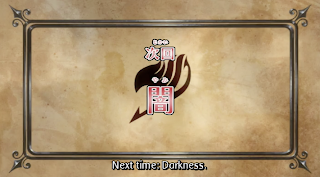