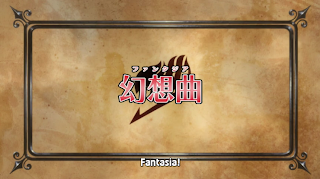 Well, this is it, the end of the arc and of season one. It’s been a fun ride, initially I had my doubts about the quality of the anime, but those were quickly settled, otherwise I wouldn’t be writing these reviews.

At the start of the episode Laxus is left wondering why Fairy Law didn’t work. Freed shows up and explains that deep down Laxus never considered any of them his enemies, no matter how much he tried to tell himself that. The first time I read this in the manga I was a little iffy about the whole idea of redeeming him like this, since he has been an unmitigated jackass the entire arc and in every appearance before this, but if there’s one thing Mashima is good at it’s tugging at your emotional heartstrings, while at the same time distracting you from the fact that his plot development and characterization could use some work in some areas. 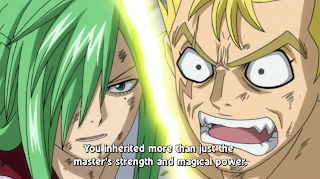 Laxus, like many of the viewers, doesn’t buy this and keeps fighting. 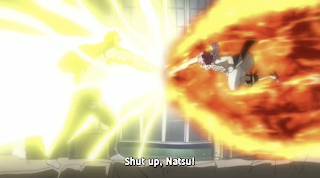 And eventually the fight is down to Natsu vs Laxus again. In true shonen protagonist form, no matter how many times Laxus tries to beat Natsu, he just won’t stay down. Laxus finally uses an attack that Freed says will kill Natsu as weakened as he is now. 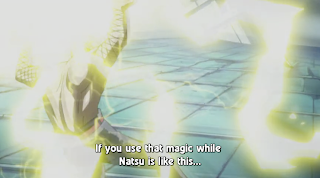 The attack misses, as Gajeel diverts it using his iron as a lightning rod. 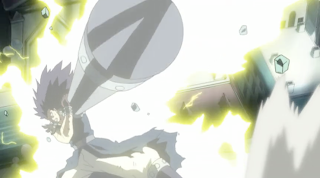 Natsu’s ass-kicking music starts playing and it’s all over for Laxus.

What follows is basically an encyclopedia of all Natsu’s attacks, which though they haven’t done any good in the fight before, finally take Laxus out. 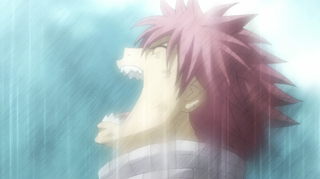 The scene changes and we get our first real glimpse of Igneel, who seems to be hiding somewhere in a volcanic land. he is visited by a blue orb, and though it is not explained, from what I can tell, Dragons for some reason are no longer allowed to interfere with human events. If this had of been the end of the series I would have been furious at them for ending with such major new information. I’ve still got several theories about Natsu and the Dragonslayers, most of which come back to him being a dragon in human form. Though I admit that the basic interpretation that they are humans given the powers of dragons so mankind can continue without the dragons is also a possibility. 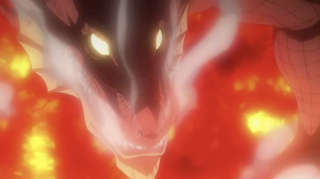 Back at the guild Makarov’s life was saved by Polyushka (however you spell her name). While it’s good that he’s not dead, it still is a bit of a copout that his impending death was used as a big threat, and then was resolved so easily. Personally it feels a bit cheap, but again, Fairy Tail is a very safe series, so you don’t generally need to worry about too much major drama involving death. Your mileage may vary, but personally it doesn’t bug me too much. But still, it’s a bit disappointing how this plot thread was resolved.

The entire guild is talking about how they are still going ahead with the Phantasia Parade, even after all the fighting and injuries. Natsu and Gajeel are the most injured after taking on Laxus, Natsu’s face is so bandaged up that nobody can understand what he’s saying. Except for Gajeel. 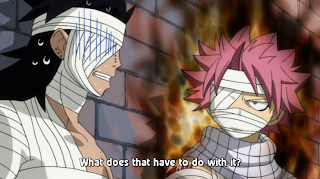 Dragonslayer telepathy, or fangirl fodder. You take your pick.

Laxus comes in to see the master, but the rest of the guild isn’t about to let him through after what he did. But Erza tells them to back off and let him through. Natsu challenges Laxus to a rematch, saying that two on one didn’t count. Laxus doesn’t say anything in response, but wordlessly accepts the challenge. This works for Natsu. 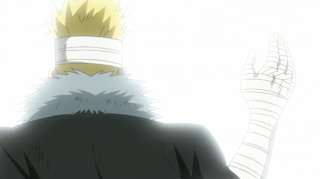 Makarov explains why Laxus could never have the guild, that they are more than just a place where wizards can get work, that for many of them it’s their home. Laxus says that he just wanted to make the guild stronger. A touching moment is shared between grandfather and grandson, before Makaro expels Laxus from the guild. 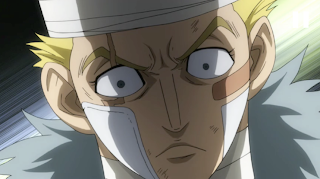 Laxus takes his expulsion pretty well, and somehow we feel sorry for him, despite the fact that he’s been a pretty big jerk. Though perhaps it’s really Makarov we’re feeling sorry for. 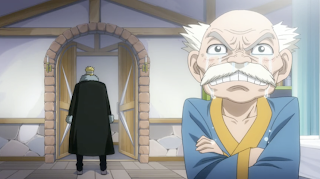 The Raijinshu are pretty pissed when they find out that Laxus is the only one who was expelled, despite all of them being equally as guilty (Fried was the only one who showed any remorse). They all say they’re going to quit in protest over the expulsion, but Laxus convinces them to stay with the guild. 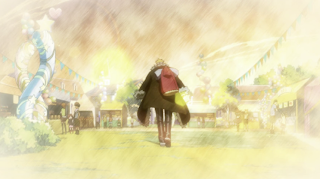 At this point we get another one of those scenes that would have infuriated me if the anime were ending with this episode. Ultear is standing on a mountain top… 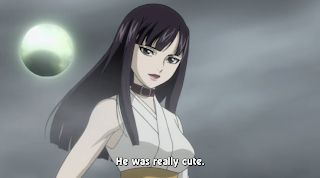 No reason, she’s just standing on a mountain.

Talking to someone in her crystal ball. She reveals that Jellal wasn’t being controlled by the spirit of Zeref, he was in fact under Ultear’s spell. Apparently Ultear has been evil since childhood. She calls the person she is talking to Master Hades, so we know he must run the local homeless shelter. Thanks to Jellal they acquired one of the keys needed to unlock the seal. The scene switches to Jellal floating someplace blue, and I hear waves. It kind of reminds me of Erza’s near death experience, so it seems to be foreshadowing a return for him? We’ll see where the anime goes with this. 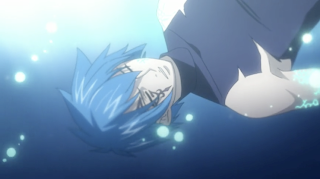 And now, what we’ve all been waiting for. What we’ve been slogging through the boring fights for. The Freaking Parade!

Laxus is watching the Fantasia Parade from the sidelines, along with several supporting characters from previous arcs spread through the crowd. The entire guild has several floats set up. The girls are doing a cheerleader routine. 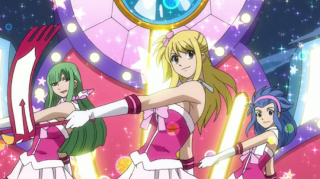 “Help! They used up all the animation budget on Natsu’s fight!”

Mira disappoints her fans with another one of her transformations. 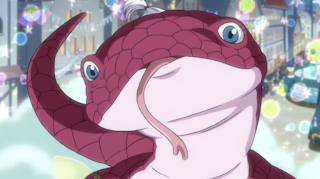 Furries: Mira is doing it wrong.

Gray and Juvia have an ice and water palace together. 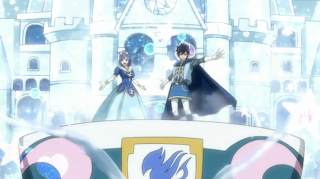 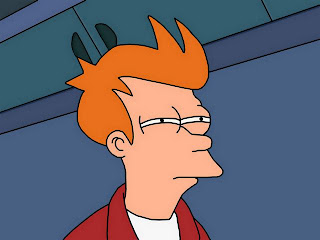 And Erza’s doing a sexy sword dance. A beautiful woman and swords. I had no idea someone was pandering to my very specific fetish. 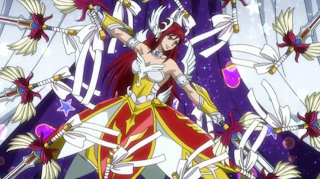 Natsu is doing fire tricks, despite being injured. 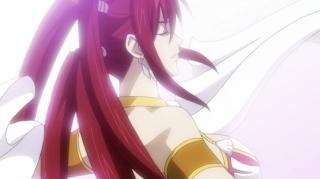 Somehow I…forgot to take a screenshot of Natsu.

Gajeel gives Makarov the information on Ivan’s location he’d been able to find, revealing himself as Makarov’s double agent, tasked with tracking down Ivan. While Gajeel continuing to be a villain would have been a great source of drama, I have to admit that I was relieved when I discovered that he’s really one of the good guys. I think I know what happened here. Mashima liked the character so much that he couldn’t bear to keep him as a villain, and made him a good guy. I can sympathize with that, having done it myself a few times.

Makarov does a weird dance, and we get another flashback to Laxus as a kid, inventing a sign that he’ll hold up to show that no matter where he’ll be, he’ll always be watching his grandfather. 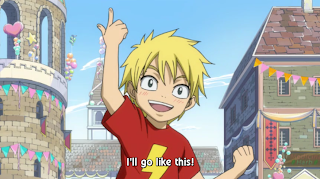 Just as Laxus is about to leave he turns around and sees his grandfather, and the entire guild raising the symbol he had thought up all those years ago high into the sky as his send off. 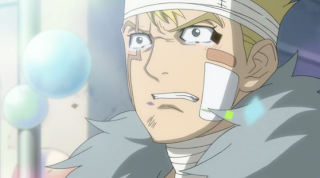 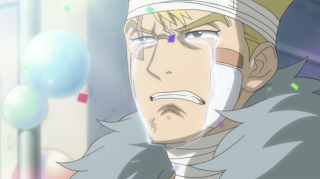 The whole thing ends on an emotional high note, and with a small monologue from Lucy, once again reminding us that she’s the main character. That portrayal of her makes me think of her as a slightly more subtle version of another character. 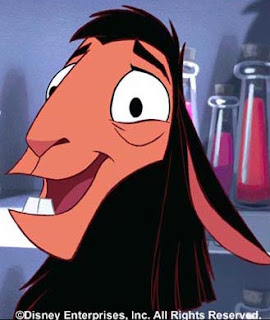 And there’s a preview for the next episode, confirming that the series will continue past this. It’s from a filler chapter I mentioned before where Gajeel wears the weird getup, and it seems to be combined with an extra chapter that is fairly shippy, so you may or may not enjoy this episode that much more.

Like I’ve said, this would have been a good place to stop. While not everything was resolved, it still would have ended the series on a high point, and I’ve seen series where the ending is an even bigger cock tease than this one would have been.

I’m glad Fairy Tail is continuing, though the question is how they plan to continue after this. So far, according to the next episode preview, the filler route seems to be the most likely. There are only two arcs left after this, with a third one starting, and a short two chapter mini arc in between this arc and the next. I can easily see them giving us a breather after the action packed climax of the first season, and have some fun with filler. It’s not like Mashima doesn’t have plenty of omake chapters and extras that could be adapted into filler. As long as the filler is fun, I won’t complain about it. So we’ll see where the anime’s worth lies in the filler.

Even if the series gets ruined with excessive, non-Mashima filler, this first season will remain one of the most faithful anime adaptations of a popular manga. And after what I’ve heard of the Rave manga, I’m glad that Mashima got such a great anime made from his work.

So, as we end season one let us look back in retrospect, is Fairy Tail a perfect series? No, it is not. There are plenty of issues one could have with it, issues that could keep someone from enjoying it. But if you know how to relax and have fun then you’ll enjoy this series. I highly recommend it to people who like shows like Naruto, One Piece, and Bleach, as it’s action packed, with one of the best soundtracks I’ve heard before, and is fairly light hearted overall. If you only like seinen series, you probably won’t like this, in fact I’ll guarantee that you won’t like it, so don’t bother with it. Everyone else, just have fun and you’ll like Fairy Tail. 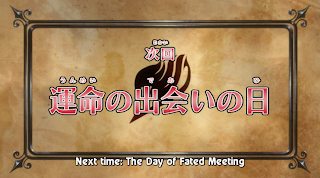