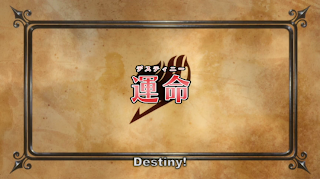 I remember loving the second OP for this series the most. However, somehow I find myself watching the new OP every time I start one of these reviews. While actively thinking, “This isn’t my favorite opening.” Guess it’s just that catchy. Bizarre.

Also, in case I haven’t mentioned it before, but the music really has been improving in the last few episodes. I loved the music starting with episode eleven, but as of recent even that great soundtrack has been improved on. I can’t wait to see where the soundtrack for this series goes after this.

I’m going to try and make this review a little different, and keep it brief. I do enjoy writing the longer reviews, with plenty of screen shots, but it does get to be a bit much to write, and I imagine read, ever week. So I’m going to go for brevity here and try a new format.

Erza faces off against Ikaruga, the last of the Trinity Raven assassins. This is another battle where the protagonist seems mismatched, as Ikaruga effectively cuts any armor Erza dons to pieces. 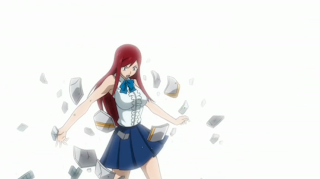 Personally I’d go for chain-mail under my plate armor, but whatever.

At first Erza’s attacks are meaningless, and even her strongest armor is defeated. Until she admits to herself that the reason she was always wearing armor was to hide her heart behind it, once she realizes this she removes her armor, and defeats Ikaruga. 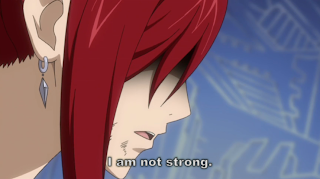 I really do like the symbolism behind this. The main theme of Fairy Tail is the heart, and the connection between families. In this case it’s not a biological family, but the ties between the guild are the same as those between families. The overall message of the series is the importance of family, and sticking up for said family, as was shown in the previous Phantom Lord arc. In this arc the main theme is emotional closeness between family. Erza doesn’t defeat her enemy until after she accepts the fact that her heart has been closed to others for too long. By opening herself to others she begins the path to overcoming her demons.

On another note, the scene where she confesses her weakness is beautifully orchestrated, the music continues to impress me for this series. I’ll cover the music in more detail in another review, but for now, just know that it is great.

A weak point of this episode happens right after Erza’s fight, where Simon spends a good several minutes explaining what just happened to Natsu. I know that the guy needs to know what’s been going on, but that’s a lot of time to spend explaining something we’ve just seen happen. 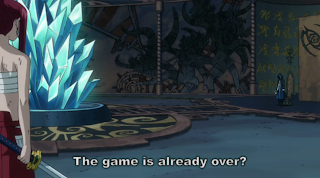 Erza goes after Jellal with the intent, as Simon reveals, to stall him long enough so that Etherion can take out both of them. Which she thinks is the only way to atone for her failure in the past, and because she can’t take his life, as she still cares about him, or at least who he used to be. Now, is it only me, or doesn’t this sound oddly like how Gray tried to sacrifice himself to stop Lyon. Or how Lucy was willing to give herself in to Phantom Lord, to save the guild. I’m noticing a trend in storytelling here. I’m kind of scared of the same thing happening in a Natsu-centric arc.

Erza faces off against Jellal, and at the end of the episode has gotten the better of him. What makes this ending even stranger is that for once the ending theme that starts during the last few minutes of the actual episode does not sound out of place for once. 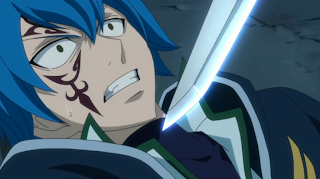 Nothing quite like cheery music when it’s murderin’ time.