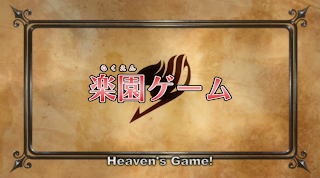 Episode thirty six starts with Natsu in the same predicament that he found himself in at the end of the last episode. 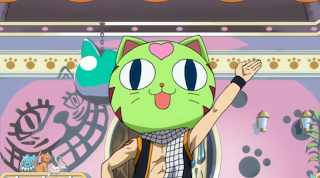 Just roll with it.

Oh yeah, and he’s about to get shot. 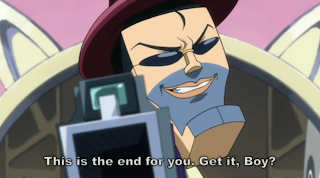 I should probably mention that this episode features a new opening theme, complete with footage showing the Raijinshu, meaning that the anime is safe past the Tower of Heaven arc. And since I mentioned before that if they were going to stop rather than continue the anime, then this would be a good place to stop because of that sense of finality that it has, then I don’t think they are going to stop any time soon, since after this there really isn’t any other good stopping point. Though we’re fast catching up to the manga, which worries me a little, since after this there really are only three more story lines. The Raijinshu arc, the Oracion Seis Arc, and then the Edolas arc. It always surprises me how few story lines Fairy Tail actually has.

I don’t know if they’ll add in a filler arc or so, but I figure that there should be plenty of opportunities for this. I only hope that the anime doesn’t go its own route and end on filler. Either way, if it does end badly, at least we had a good run up to now. I don’t want the anime to end too soon, but I don’t want it ruined by terrible filler. I guess the best we can hope for is that they add in a filler arc to allow the manga to get ahead by more, and that the filler is actually well written.

Anyway, back to the episode, as Erza and her group run up the stairs on the outside of the tower Simon explains how he brought them there with the hopes that Natsu would take down Jellal, explaining that Natsu’s true power is greater than any of them realize. 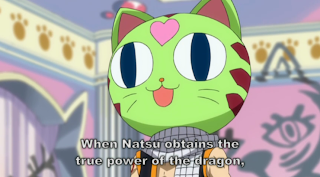 Of course this begs the question, how does Simon know this?

Wally tries to shoot Natsu in the back of the head, but Millianna, the psychotic cat girl, knocks his aim off target, yelling at Wally that he shouldn’t bully kitties. Wally of course tries to explain that Natsu isn’t a cat, he’s just wearing a cat shaped mask. The lack of effort Natsu puts into his “meow,” or “nya,” as the Japanese say, is incredibly hilarious. This of course works, but only for a little while as Wally is able to convince Millianna that Natsu isn’t a cat, just pretending to be one. This pisses her off, as she exclaims “How dare he impersonate a cat?” Completely ignoring that’s what she herself is doing. 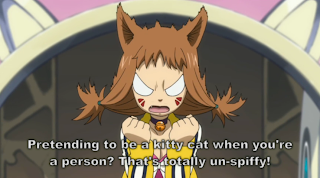 Things don’t look to good for Natsu, as Millianna joins the fight and disables his magic. With no options left he has to resort to his final attack. 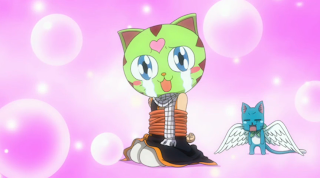 One thing about this episode that I wasn’t too fond of was when Jellal’s hired assassins were introduced. It was corny, and over the top, and the fact that he’s introducing characters that he himself should already know show bad story telling. The fourth wall is subtly broken, but since there is no one else there it’s quite obvious that he’s talking to the audience when he introduces the three assassins. Personally I would have skipped that and just had them introduce themselves when they appeared before the people they were going to fight. It would have saved time, and been better writing. 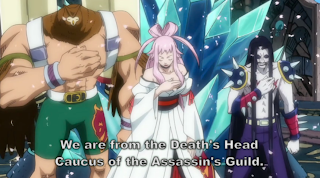 It’s amazing how anime and manga can take the most ridiculous characters and make them credible threats. And don’t be fooled by the goofy looking owl man, his special ability is absolutely terrifying.

Jellal uses his magic to announce a game across the entire tower. Obviously called “Heaven’s Game.” The entire purpose of the game is that they have to beat his three champions before Etherion is fired at the building. If they lose, he’ll use Erza as a living sacrifice to activate the R-System. Sho flips out and traps Erza in one of his cards to keep her safe, and goes off to fight Jellal himself. Meanwhile Natsu and Happy take the short cut to reach Jellal at the top, but they are intercepted by…the Owl with jet packs. Like I said, ridiculous characters. 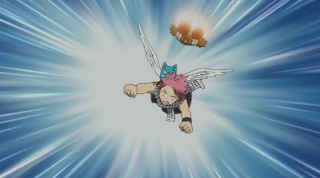 Natsu and the Owl, Fukuro, fight, and Simon, who found them, tries to help by using his darkness magic. Of course that does nothing, seeing as Fukuro is in fact an Owl. 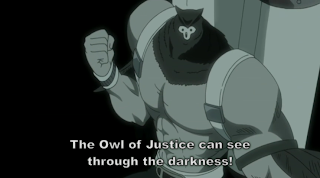 Common sense could have prevented this. But it wouldn’t have done anything about the drugs that caused this little flash of inspiration.

Simon explains about the Assassins guild that Fukuro comes from, once again causing me to wonder, how does he know all this that Natsu, who hasn’t been stuck in a tower most of his life, doesn’t know? My best explanation is that Simon was allowed some sense of freedom and movement through the rest of the world?

Natsu gets pissed at the thought of a guild being used to do such dirty jobs like assassinations. 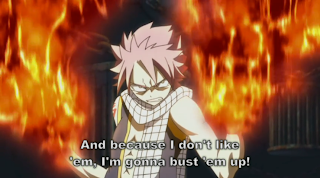 The last part of the episode is Lucy and Juvia encountering Vidaldus Taka, a heavy metal rocker parody, while looking for Natsu. When they are attacked by a wicked guitar solo, that has Lucy covering her ears up, Juvia once again proves why she’s one of my favorite characters. 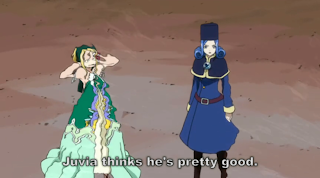 At first it looks like Juvia has the advantage, as her liquid body absorbs all of the attacks and comes out unharmed. But when it turns out that Taka’s hair can absorb any liquid their advantage is lost. Hmm…It’s almost like there’s some kind of higher power that’s pairing the fighters off with people they are at a disadvantage against. 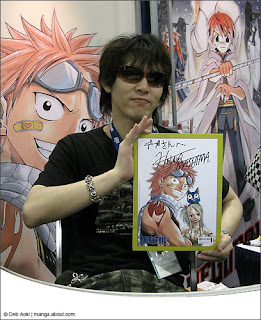 Praise be unto Mashima!

Of course in Lucy’s case that really doesn’t take much effort. As is proven by the fact that she’s pretty much boned when Taka takes over Juvia’s mind and turns her into his Succubus. 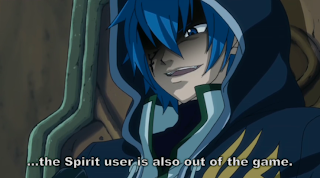 Jellal: The voice of the audience.

Also, I think Juvia’s voice actress, who still isn’t listed on wikipedia for some reason, deserves some credit for the range of voices she puts into the character, as not only does Juvia have her regular voice, but also her cute voice, and now her mind controlled Heavy Metal Succubus voice.

Lastly, there is a new ending theme, and it’s pretty good. It’s not my favorite, but it’s pretty decent. It also reminds me that I need to update my list of OP and ED songs for Fairy Tail, and check if any of the singles are available yet.

This episode was very excellent, despite the bad writing around the time that the assassins were introduced, it had some great action, which is really one of the main reasons I watch anime, is to see the fight scenes animated. This series definitely continues to show promise.