This episode and the following are the two that I wasn’t really interested in. Like I mentioned before, Loke isn’t one of my favorite characters, simply because he’s the flirty archetype. I know I’m being unfair here, but I really don’t like that character type.

While watching this episode, remembering what I know about his future involvement in the manga being quite sparse, I actually enjoyed it, and episode thirty two a lot more than I thought I would. Loke really is a fun character, and I’d enjoy him a lot more if he wasn’t the ladies man type. Granted a lot of my previous ire was shipping related, but since I’m past that at this point, I’m able to enjoy him a bit more. Unfortunately while giving up shipping for other series may be relatively easy, a few of the series that I’ve enjoyed for a while are harder to change my mind for. Granted usually I’m pretty good at picking pairings that the author is actually trying to develop, so I don’t generally have to worry about that. But I tend to have to stop worrying about shipping so much because I get annoyed when the author starts ship teasing for other ships that he has developed almost as much as the main one.

Anyway, my obsession with romance in shonen aside…(what can I say? I enjoy romance, but hate romance focused series, simply because all the conflict is focused around the romance, and for me that doesn’t make for good conflict. I just want a simple romance where the conflict is centered around other things. Shonen manga is a pretty decent source for that, even if most of the time the romance isn’t focused on at all. Oh well, you can’t win them all). This episode really wasn’t as bad as I thought it was going to be. In fact the animation was top notch, and the voice work was quite excellent.

The episode begins with Lucy and her team taking out an unnamed dark guild, or bandits, or something. Like I said, they’re unnamed, I’m not even sure what they were. After finishing they run into Loke, who is also on a job, and who for some reason is still afraid of Lucy. The animators also added a few more scenes with Juvia in just to emphasize the fact that she’s been stalking Gray. Fortunately this time they didn’t go overboard with it. 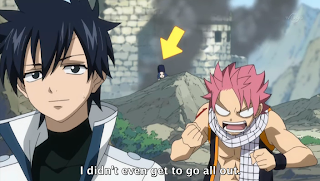 See? That’s not too bad. 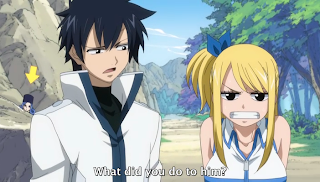 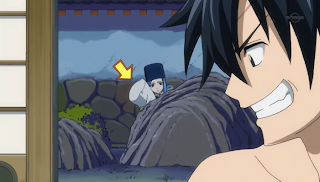 Actually, this was them showing restraint. 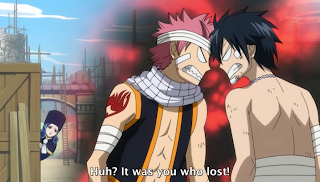 You know what? I give up.

While stopping over at a hot springs the group gets into a pillow fight, and obviously outmatched by her team mates Lucy decides to go for a walk instead of risking her life against her overpowered team. 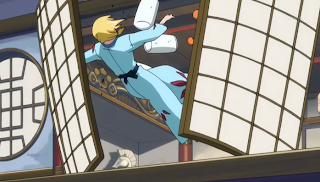 While out for a walk she runs into two tourists, who even I can tell talk with incredibly strange accents. I’m not sure what exactly they’re meant to be, I’m pretty sure they’re not Osakan accents, because I’ve heard characters that apparently speak with an Osakan accent, and I can’t tell the difference between that and regular Japanese. In this case the exaggeration is incredibly obvious, kind of like it was with Toby’s accent.

The two turn out to be mage kidnappers, and Lucy is about to be taken by them when Loke gallantly shows up and saves her. 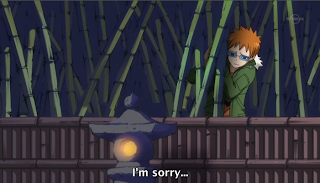 Out of gratitude Lucy invites him to get something to eat. 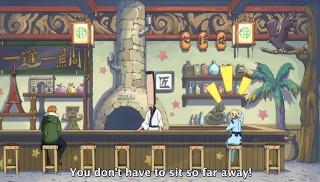 There’s some bizarre flirting yet not flirting and “You should forget about me” which is oddly reminiscent of someone else. 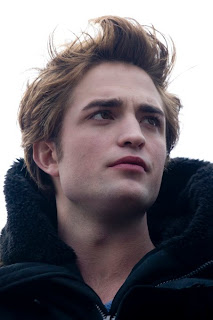 You know, I was wondering why I didn’t like Loke.

Loke tries to pull the “I’m dying,” trick, effectively pissing Lucy off when he reveals that it was just a line he uses on women. Little did she know it was actually foreshadowing! 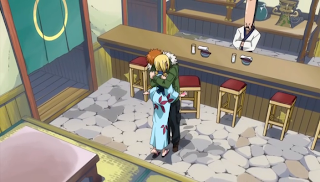 I was going to make a foreshadowing related joke, but if you’ll excuse me, I need to wash this bad taste out of my mouth.

When they get back to what’s left of the guild, Lucy is in an understandably bad mood. 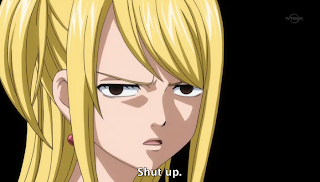 Something is obviously up when several of Loke’s girlfriends show up, all claiming that he broke up with them. 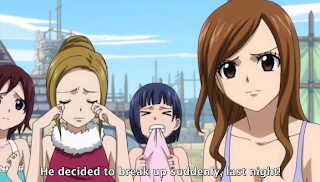 Loke approaches Lucy one more time, a behavior at odds with his previous attitude of avoiding her at all cost. Clearly something is up, and Lucy decides to investigate what it is later that evening. After summoning Crux, the Southern Cross, Lucy learns that Loke had a connection with a stellar spirit mage in the past, named Karen.

Gray shows up at Lucy’s apartment, telling her that Loke’s disappeared, and everyone has gone looking for him. Lucy finds him at Karen’s grave, and reveals that she has figured out who he is, Leo the Lion, a stellar spirit. She asks him why he’s still in the human world after his owner died, and that normally spirits shouldn’t be able to survive in the human world. He tells her that he’s survived for three years, and that he’s at his end. Lucy doesn’t understand why he won’t return to the spirit world, and he reveals that the reason he can’t return is because he was banished for being a treacherous spirit. For causing his owner’s death.

This episode, while one big headache for my inner shipper… 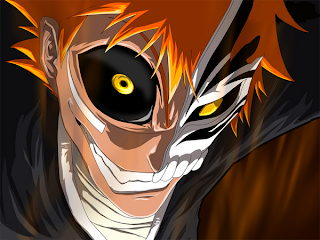 …was actually quite high quality and overall enjoyable to watch. The anime keeps improving in quality, which is great to see, and the music used for this episode sets a very melancholy and touching tone. Because in the end the point of this episode isn’t about romance, as some, myself included at times, might wish or fear. It’s about friendship, and doing anything for a friend, even when that friend has already given up. This theme continues into the next episode, when this mini arc is concluded.