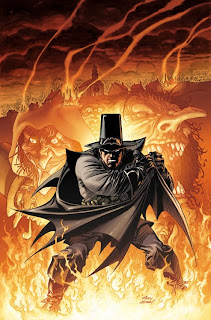 I was going to review this as soon as it came out. I plan to do that for this entire mini series. But for some reason I forgot about it and only just realized that I hadn’t actually reviewed this issue. I am no rectifying that. I also hope that this review will help me wash off the cooties from my review of W.i.t.c.h. No, I am not being childish about this!

The second issue of this mini series continues Bruce’s adventures into the founding days of Gotham city, during the Puritan witch hunts. When he travels through time for some reason he drags along a giant squid monster. Before my manga-Batman nightmares become real, Bruce kills the thing and blacks out. He wakes up to a strange chant and finds himself being healed by the girl he’d stumbled upon when he first arrived. Apparently he still can’t remember his name, but the girl, obviously a witch, tells him that he has been touched by a great dark god, and if he stays with her she’ll love him until the end of time. Now I know Batman is Pimp, but I didn’t realize he worked that fast.

Skip to Superman, Booster Gold, the Green Lantern, and someone else I don’t recognize because he isn’t in any recognizable costume and characters’ faces keep changing depending on who the artist is. Complain about the hair styles being the only thing that distinguishes anime characters from each other, but at least they have something to distinguish themselves by! There are some artists where if they aren’t wearing their costumes or any iconic clothing whatsoever, I wouldn’t be able to tell Bruce Wayne or Clark Kent apart.

There’s a bunch of techbabble that I skim because it makes no sense anyway, and it all translates to, “We’re trying to find Batman.”

The rest of the comic is mostly a certain Brother Mordecai, a witch hunter who values logic more than superstition, being revealed as actually being Bruce. Big surprise. Bruce asks the girl that found him to take him back to where she found him, and ends up fighting the creature that came with him when he traveled to this time. The girl who took Bruce in is taken by the witch hunter, Malleus, aka/ Nathaniel Wayne, and hung, but not before she curses the Wayne family line. Oh if only she knew the irony of it all. Bruce himself travels through time again to Blackbeard’s time. Now…correct me if I’m wrong, but isn’t that traveling backwards? I might be wrong, but it just seems strange to be going from Puritans on the East Coast of what later became the United States, to Pirates.

Back to Superman and his group, apparently the guy I didn’t recognize was Doctor hunter. Which is no help to me at all. The archivist, who I have no idea who he is, turns out to be Bruce, at the end of his time traveling. It isn’t made clear what his motivations are, my thought is he’s gone crazy…er, but whatever it is he’s trying to do it will destroy the universes. Sorry if this wasn’t very clear, but I’m not quite sure what is going on. Either way, on its own this comic didn’t make much sense, and I’m just hoping for that with the next issue things will start to make sense and when we finally get to the present that Bruce will be able to join the main stream events again. If it turns out that after all of this he ends up dead for real, I’ll be annoyed. This is one of those occasions where I would very much prefer if the obvious happens. Batman makes it through time and makes his way back home. Sure it’s cliche and has happened before with other series, but keep in mind that I didn’t want to have to go through this in the first place.

If you liked my review, buy the issue here: Batman Return of Bruce Wayne #2