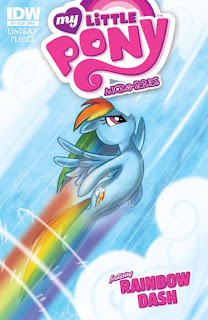 The Story
During a performance with the Wonder Bolts, Rainbow Dash injures her wing when she crashes into a storm cloud inhabited by two Gremlin like creatures. The creatures syphon off the happiness of Ponyville, and despite Rainbow Dash’s best efforts, with her injured wing she is unable to drive away the storm cloud.

Finally, after trying everything she could safely try, Rainbow Dash performs a double sonic rainboom and drives off the Gremlins and their storm cloud. The double rainboom cheers all the ponies up, and has the side-effect of coloring Applejack’s apples in all the colors of the rainbow.

The Review
Art-wise this issue is similar to the Twilight Sparkle issue, with outlines colored similarly to the color of the object. But the art style itself is a bit better than last issue. Not quite at the same level as the main comics, but it certainly gets closer at emulating the art style of the show but not quite. The art in this issue also manages to do a better job with the faces, making them more expressive when required.

The writing, is a bit odd. While there’s a more straightforward plot than last month’s issue, the plot itself is somehow both simple and jumbled. On the one hand there’s an actual threat in this issue, as opposed to the Twilight Sparkle issue. However, what threat said threat poses is a bit unclear. It’s stated that the cloud is draining the happiness from Ponyville, but it doesn’t really explain how, nor does it explain how the characters know this is what’s happening.

I think that’s the biggest problem with this issue. There’s an overall lack of clarity in the actions of Rainbow Dash. She’s doing what needs to be done, but it feels more like events are happening because the plot is requiring them, and we’re supposed to let that be the only explanation we get.

This isn’t really a very solidly based complaint, there was just something off about the writing this issue. Even the way characters talked felt off. Like the words were coming from the plot, not from the characters themselves. The closest other work I can compare this to is the series Black Metal. If you read that series you get a clear sense that the words aren’t coming from the characters. They don’t speak like real people would. They’re just vessels for the words of the writer, with no real sense of who the characters are beyond the most basic of tropes. Rainbow Dash isn’t nearly at that level, nor do I think I can really make the claim that her words are just the writer speaking, and not Rainbow herself. But something about the dialogue seemed off. Like it didn’t fit.

Also, the bit at the end with the apples was strange. I get the sense that the idea is that Dash’s rainboom colored them somehow. Applejack’s dialogue, “We’ve got something special on our hooves” is what suggests this to me. Now, anyone that has watched the show knows that Zap Apples are not only a thing in the show, but they’re specifically a rainbow colored apple type thing. Has the writer of this issue actually watched the whole series? Because nowhere does this issue say these are zap apples. It’s heavily implied that Rainbow caused these. And while I can appreciate what the writer is trying to do, I still can’t help but feel that either he hasn’t watched Family Appreciation Day (which would be an absolute shame, that episode is excellent), or the fact that they exist slipped his mind.

It is certainly possible that he just wanted to make these his own thing. But any fan of the show reading this book would notice the similarities between the two apples, and would then wonder if the writer either watched the show, or did any research to write this book. Which might not even be close to the truth. Either way, it’s an unfortunate implication that I’m sure has an explanation.

Overall, while this issue had a more focused story, I think I appreciated Twilight’s issue more for the focus it gave her character in a way that centered in on her character. Rainbow Dash’s purpose in this issue is fixing the problem. Which works for an action focused character like her. However, as a reader I prefer character based pieces, and there wasn’t quite enough of Rainbow Dash, beyond what we’ve already seen in the show. Twilight’s issue expanded on something we already knew about, but it did give us something new, even if it wasn’t all that much. This issue on the other hand didn’t give us anything we didn’t know before. So as a character piece it is somewhat lacking, but as a stand alone action based story I can’t fault it.