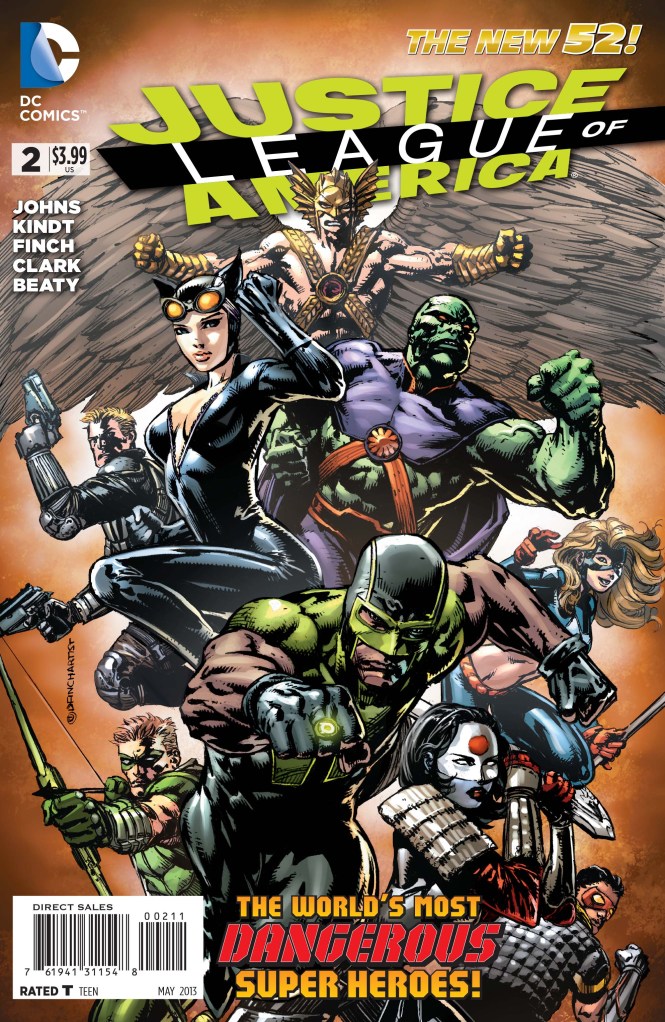 The team is introduced to each other, and after being introduced publicly to the United States, they go on their first mission where they meet the Justice League impostors.

The Review
The first draft of this review was quite quite embarrassing. I had somewhat of a strong emotional reaction to certain…shall we say shenanigans…in this issue. Fortunately this is one of those rare cases where waiting a week to write the review served me well. Now I can calmly mention that I take issue with certain elements of this book, without coming across as a lunatic.

So what caused me to engage in fanboy rage? Well, let’s just say that when I started reading this book I was worried we were going to get more of the kind of pointless romantic/sexual tension that far too many team books engage in. What worried me more is that one of my favorite characters, Catwoman, was now in the line of fire for such shenanigans.

And while I think this is a good book, I’m noticing worrying signs. For one, the little flashback of Batman dumping Catwoman. When exactly did this happen? With Stever Trevor we got to see when Wonder Woman dumped him, but apparently I’m supposed to buy that the exact same event happened for two of my favorite characters, and I didn’t even get to actually see it? And why was this done? Well why else? Because apparently Geoff Johns intends to write this team like every other team, with pointless sexual tension between the characters.

Granted, one page isn’t necessarily proof, but it’s proof enough that something is going to happen in this book that I’m probably going to be the only person that cares about it. I swear, comics read like fanfiction written by opposing camps of shippers sometimes. This becomes especially distracting when we consider how heavy handed DC is in every other book involving Catwoman and Batman.

But, I digress, perhaps I should talk about the book itself? Well, now that we finally have some plot, it’s actually quite good. I enjoyed the character moments, and would love to get plenty more of those. For now I’ll continue reading this series, since it shows potential in every aspect except the one I’ve spent a few paragraphs complaining about. So here’s hoping we don’t descend into the shallow waters of characterization that relies on high school dating scene dynamics.