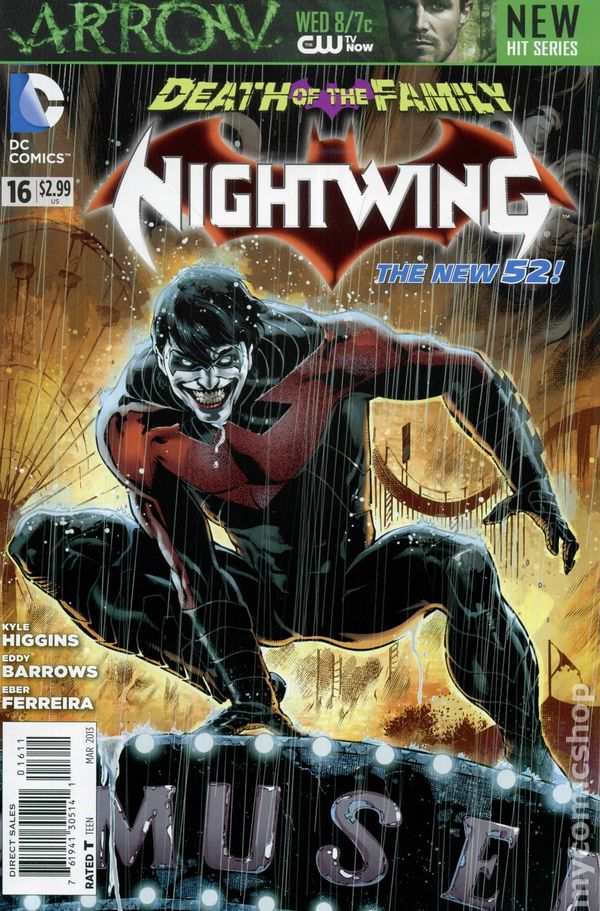 With the Joker back in town, Nightwing has to focus on hunting down Lady Shiva before she finds her target. He is able to drive her off, but only barely. Meanwhile, Dick has no time to rest as the Joker strikes him by attacking those close to Dick. When his friend Jimmy turns up dead, Nightwing tries to get the circus out of town. But Joker’s trap is too deeply laid for anyone to escape. Nightwing finds himself surrounded by drugged members of Haley’s circus and beaten into submission.

The Review
Out of the tie ins that I’ve read for the Death of the Family event I have to say that Nightwing scribe Kyle Higgins has handled it the best. From what I’ve heard Higgins and Snyder work pretty closely together, so there’s an organic feel to their crossovers. Rather than have just an issue or two involved in the crossover itself, the events are tied into the main plot of the book.

Besides Batman, I think I enjoyed this part of the crossover the most. Though I have to say, while the stakes were quite high for Nightwing, I found myself a bit more detached than I would have liked. The biggest problem is that a good chunk of his supporting cast are characters I have not grown to like. Not that I hate them, I just don’t have nearly the same emotional attachment too them as I do to the mane Bat Family cast. These are characters I’ve been reading about on and off for the past year, going up against characters I practically grew up with. It’s not too hard to figure out which ones are going to loose out.

It’s not like I can lay the blame of this at Higgins’ feet. It’s just a weakness of the medium. At monthly installments we need more than a year of periodic appearances. Without that connection to the characters the stakes just can’t be raised as high as they need to be.

Take for example Jimmy’s death. Of course I’m sad to see him go, but he hasn’t been involved at with the core of the story. He’s made appearances, but not nearly enough to have me concerned when Joker corners and murders him. Likewise, when Raya is murdered, it works a little better because she had more screentime, but she was also a former romantic interest. And as we all know unless your romantic interest in a Batman book is a superhero then chances are they aren’t going to make it out alive.

Even when the entire circus are gassed by the Joker, while I was suitably horrified, I just didn’t have the connection with the characters I needed to propel this book a grade higher. That’s why everyone was intrigued by the idea that someone in the family would die. These were characters for whom we did have the time to grow attached to. That’s why the threat against them in Batman worked so well, and why them being able to escape relatively unharmed rubbed some readers wrong.

Unfortunately the stakes will never be that high. Because we don’t want them to be. I admit, I thought it would have been amazing had Alfred been murdered. I was worried it would happen, and that’s what an event like this should do. The idea evoked fear in me. But at the same time I knew that DC editorial would not allow any major characters to die. Alfred has been a part of the mythos for generations. And the other characters all have their own books to support. They played it safe. Because deep down in my heart, and I believe this to be true for everyone, we all knew we would hate it if something actually happened to them.

Putting the characters we care about in harms way would serve the story very well. But the outlashing from fandom that would come with such a decision means DC will never make that decision. After all, there are more stories to tell, and more books to sell, and we need to keep our heavy hitters around. Thus we get characters created solely to die. But their deaths have a limited impact because so many of us readers just don’t care about those characters. It would take a master to write a character who in just a few short appearances endears themselves to the readers enough to make their death the tragedy it should be.

This may not be that book. But it’s still a great read for anyone that doesn’t spend their time thinking far too much about comic books. ie/ Comic book reviewers.