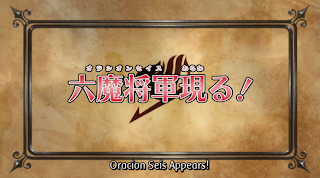 Watch the Show Here!
First thing I noticed this episode was the new music playing during the recap of the previous episode. All I can say is that this arc is that judging from the music alone this arc is going to be amazing. If everything else is up to par, then we will not be disappointed in the slightest.

Wendy introduces herself as the representative of Caitshelter, along with her talking cat, Charle. This was a fun little surprise, as it’s the first time we see another cat like Happy. Happy is of course smitten by the only other girl of his species he’s ever met. 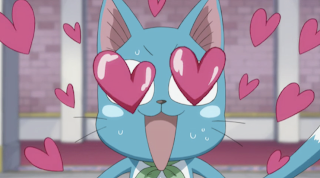 The first part of the episode is a bit slow, but entertaining, as the characters all get to know each other, and go over the plan and background information for the mission. The Blue Pegasus team turn out to be the intelligence portion of the alliance, as they brief the other three teams about the Oracion Seis, and Nirvana. Unfortunately they don’t know what Nirvana is meant to do, other than that it is powerful magic. 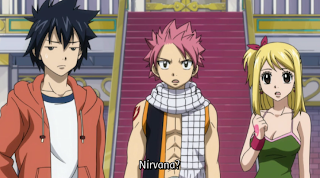 Hibiki gives a run down of all the members of the Oracion Seis, and if you pay attention you’ll notice that only specific characters respond to the pictures of specific Oracion Seis. I wonder if this will be in any way significant?

Yes. Yes it will.

The plan is to fight in pairs at least, since they outnumber the Oracion Seis, and aren’t entirely sure how powerful they are. Then, once the enemy’s base of operation is discovered they will bomb it from the sky with the magical bomber, Pegasus. 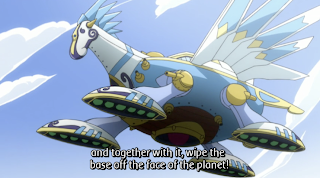 Natsu of course rushes off on his own, leaving his team to chase after him, Lucy sobbing all the while because experience has taught her that this can only end badly. 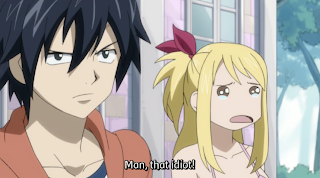 All the younger mages rush off, leaving Ichiya and Jura behind. Ichiya reveals himself to be a fake, and takes out Jura with a sneak attack. Angel of the Oracion Seis appears, and reveals that they now know the alliance’s plan. 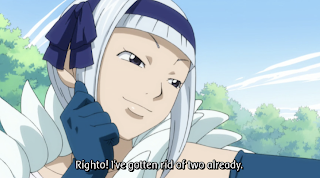 The rest of the group reach the Woodsea. 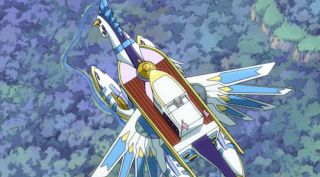 And Natsu falls off a cliff. The bomber is shot down from the sky, and the Oracion Seis appear. 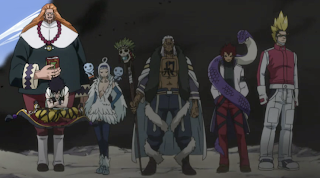 What happens next is a beautifully animated fight, as the alliance get their asses kicked in a fluid display of animation. Erza gets poisoned, and Brain is about to finish them off, when he notices Wendy, and recognizes her. 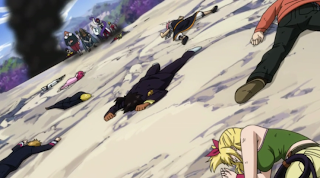 And then the episode ends. Never have I been more enraged by a cliffhanger! 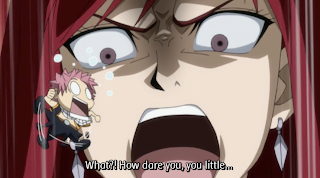 While it started off slow, I have to say this episode really sold me on this arc, and the anime in general with the animation in the fight scene alone. Too often do fighting anime rely on shoddy animation to pad for time. Fairy Tail does none of that, providing fluidity that is almost movie quality. Of course there are the common limitations of a weekly animated series, but to see them put the extra effort into their work really fills me with confidence that whether it continues or ends this season, Fairy Tail is one of the higher quality action adventure anime series out there. 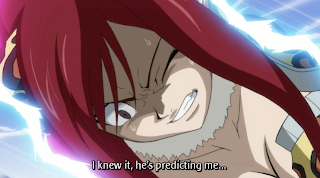 I give this episode a solid: 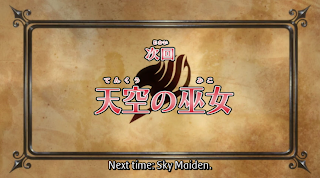