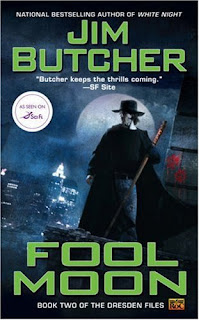 When my buddy Nathan recommended the Dresden Files I petered around a bit, before finding Fool Moon, the second book in the series (he recommended I skip the first one), in the Library. After getting it I still waited a few weeks before starting it. As soon as I started reading it, I couldn’t put it down.

The Author of this article would like to state that this previous statement is in fact erroneous. He was indeed physically capable of putting the book down. It was just so good he didn’t want to.

Okay, so I didn’t breeze through the book like other books I’ve loved in the past. I do have things I do during the day, so this took me a little longer to read than perhaps I would have taken if I’d focused just on the book. But I didn’t put it down for weeks on end, and then pick it up later, when I remembered that I had an unfinished book.

Fool Moon, according to Nathan, is not the best book of the series, in fact apparently it’s only slightly better than the first book. Which is why I have such high hopes for the series. I absolutely love Fool Moon, and have a hard time imagining how the series could possibly get any better than this. Okay, so I can imagine it, I’ve since started Grave Peril and it really is even better, but at the time it was hard for me to imagine enjoying the other books more.

Perhaps it’s because I’m such a big fan of werewolves (don’t worry, I didn’t spoil anything, it’s not like Butcher tries very hard to hide it). But the story itself was fun, and a good example how the beginning of a series should be. Harry Dresden is a very sympathetic character, with a past that is touched on just enough to make me curious about what happened to him, but not enough to spoil it. That alone is a good example of the kind of hook a series needs to keep readers coming back. As you continue reading, you just get more and more hooks caught on yourself that you can’t move without digging the hooks deeper in. The more you read, the more you’ll want to read. And with every dollar you spend on the series, Jim Butcher realizes that maybe, just maybe, some ideas aren’t as stupid as they sound.

It can be a temptation to compare a series about a wizard in the modern world to Harry Potter. And you would not be wrong to do so. He’s a wizard, and his name is Harry. And he uses a wand, except it’s called a blasting rod. Oh, and both fight werewolves at one point. Yeah…you’d be stretching for comparisons at best. Please people, just because a series maybe be about a wizard in modern times, doesn’t mean it’s a ripoff of Harry Potter. I love the Harry Potter series, but just because they are the best known, doesn’t mean originality, or the basic concept stops there.

Besides, when Harry Potter fights a werewolf in the middle of a police station, then we can talk.

I try to keep my book reviews spoiler free, so I won’t go into detail about the plot. Fool Moon is a fast paced, action thriller that knows how to keep you glued to your La-Z-Boy (do they still make those?) until you reach the last page. Then you’ll only get up to either get the next book, or if you already have it, to run to the kitchen for a snack.

The Dresden Files have my support, and I’ll definitely be continuing this series. Do yourself a favor, get your hands on Fool Moon and start this series now. Even if it is the second book, there is no real background information that you need in the first book. From what I’ve been told the main plot doesn’t start until book three or four. So this is a good place to start, and well worth your time.

If you liked my review, buy the book:
Fool Moon (Paperback)